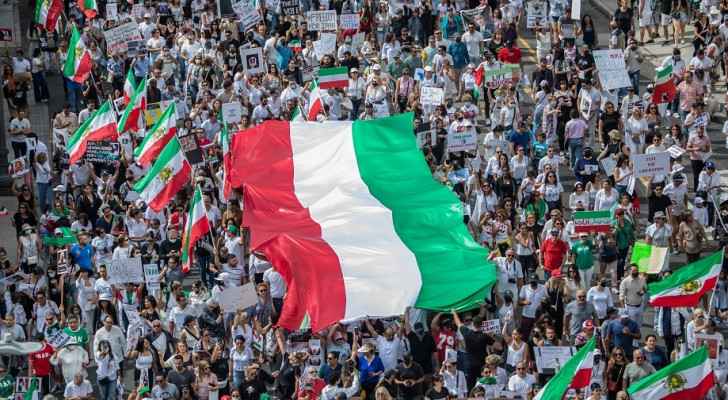 At least 92 people have been killed as Iran has cracked down on women-led protests sparked by the death of Mahsa Amini after her arrest by the notorious morality police, the group Iran Human Rights said Sunday, according to AFP.

As protests stretch into a third week, President Ebrahim Raisi on Sunday said that the "enemies" of Iran had "failed in their conspiracy".

An additional 41 people died in clashes Friday in Iran's far southeast, an area bordering Afghanistan and Pakistan, Oslo-based IHR also said, citing local sources. Those protests were sparked by accusations a police chief in the region had raped a teenage girl of the Baluch minority, it said.

Solidarity rallies with Iranian women -- who have defiantly burnt the hijabs they have been obliged to wear since the 1979 Islamic revolution -- have been held worldwide, with demonstrations in more than 150 cities on Saturday.

In Iran itself, clashes between Iranian protesters and security forces have rocked cities nationwide for 16 nights in a row after they first flared in western regions home to Iran's Kurdish minority, where Amini hailed from.

IHR director Mahmood Amiry-Moghaddam urged the international community to take urgent steps against the Islamic republic to stop the killing of Iranian protesters, saying they amount to "crimes against humanity".

At least 92 protesters in the Mahsa Amini rallies have been killed so far, said IHR, which has been working to assess the death toll despite internet outages and blocks on WhatsApp, Instagram and other online services.

Tehran has also battled unrest in the country's southeast, and it said five Revolutionary Guards members were killed in clashes Friday in Zahedan, the capital of Sistan-Baluchestan province.

IHR accused the security forces of the mainly Shiite country of "bloodily repressing" the Zahedan protest that erupted after Friday prayers over accusations a police chief in the province's port city of Chabahar had raped a 15-year-old girl from the Sunni Baluch minority.

A Sunni Muslim preacher, Molavi Abdol Hamid, had on Wednesday warned the community was "inflamed" after the alleged rape of a teenage girl by a police officer in the province.

Iran has accused outside forces of stoking the nationwide protests, especially its arch enemy the United States and Washington's allies, and on Friday the intelligence ministry said nine foreign nationals -- including from France, Germany, Italy, the Netherlands and Poland -- had been arrested.

The unrest comes as Iran seeks to revive its 2015 nuclear deal with the United States and other major powers to end sanctions that have throttled its oil-rich economy and seen South Korea, China and Japan freeze billions of dollars in Iranian funds.

The landmark Vienna deal -- which had promised sanctions relief in return for strict nuclear controls -- has been in tatters since then US president Donald Trump withdrew from it in 2018 and Iran later backed away from its own commitments.

"At a time when the Islamic republic was overcoming economic problems... the enemies came into play with the intention of isolating the country, but they failed in this conspiracy," Raisi said in a statement Sunday.

In a rare concession, Iran has allowed a detained Iranian-American, Baquer Namazi, 85, to leave the country and released his son Siamak Namazi, 50, from detention, the United Nations confirmed Saturday.

Baquer Namazi is a former UNICEF official who was detained in February 2016 when he went to Iran to press for the release of Siamak, who had been arrested in October of the previous year.

Both were convicted of espionage and sentenced to 10 years in prison.

Iranian state media said on Sunday that, following the prisoner release, Iran was now awaiting the unfreezing of about $7 billion in funds held abroad.