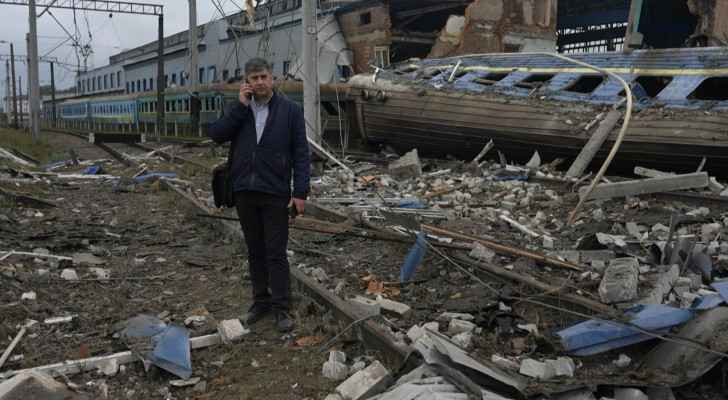 Russia fired a salvo of missiles at Ukraine's second city Kharkiv overnight, officials said on Wednesday, hitting a railway yard and knocking out power to more than 18,000 households, according to AFP.

The Kharkiv regional emergency service said the blasts, which were audible in the city centre at around 9:00 pm (1800 GMT) on Tuesday, destroyed an electrical transformer and hit a workshop.

No casualties were reported, but the regional energy company said 18,500 customers in the Shevchenkivsky, Kholodnogirsky and Novobavarsky districts of the city had lost electricity.

Kharkiv residents in these districts woke to find their power cut and commuter trams marooned without current in the streets.

The Ukrainian presidency said six people had been wounded in shelling in the broader Kharkiv region over the previous 24 hours.

At the railway yard, AFP reporters found fire crews extinguishing a fire left by at least two strikes that demolished an office, ripped up tracks and destroyed parked wagons.

"It makes no sense. There are no military targets here," complained 34-year-old welder Mykhayil.

"It doesn't make any sense. They fire randomly. They were pushed back to the border, but they continue to shoot."

The strike came a week after a similar barrage hit a nearby rail freight yard and residential blocks, and raised fears that Moscow, frustrated in its bid to occupy Kharkiv, is targeting civilian sites.

"It's very scary to be here," admitted engineer Antonina Musiyenko, 42, as railway workers cleared rubble and dug charred paper records out of the ruins of an office attached to a locomotive workshop.

"The air raid sirens are always working and you're just waiting for something to strike, but you don't know exactly where it will hit," she said, adding that she had woken to find the power cut in her own house before heading to work.

Kharkiv, a mainly Russian-speaking Ukrainian city less than 40 kilometres (24 miles) from the border, came under assault from the first hours of Russia's February 24 military operation, but held out despite artillery and missile fire.

This month's lightning Ukrainian counter-offensive drove the Russian forces from the outskirts of the city, back to the border and away to the east, almost to the limit of the Kharkiv administrative region.

But the city, with a pre-war population of more than 1.4 million, is still within range of Russian missiles.

Moscow appears to have abandoned, for now, the effort to seize Kharkiv, but on Tuesday Russia's local proxies announced the results of so-called referendums -- denounced as a sham by Kyiv and the West -- to annex other territories to the east and south.

In Kharkiv, workers shifting debris mocked this effort, insisting the cross-border bombardment would not shake the opposition of their city to efforts to split it from an independent Ukraine.

Iryna Mayor, 51, a machine operator in the rail wagon workshop, paused from shifting rubble and laying damp and torn record books out to dry, to angrily mock the military operation.

"We're Russian-speaking people, and what have we ended up with? Have we got peace, brotherhood? No, you can see what we got," she declared, pointing at the twisted debris surrounding the missile craters.