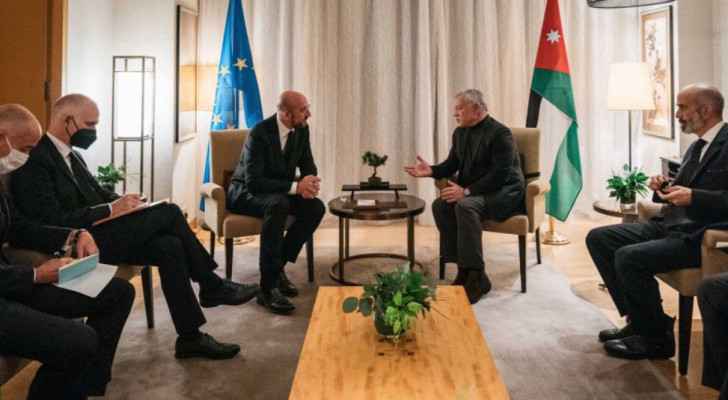 His Majesty King Abdullah on Tuesday met with European Council President Charles Michel in Tokyo and stressed the need to bolster cooperation and integration between the region and the EU in energy, transport, water, and food security, especially in light of the repercussions of the crisis in Ukraine.

King Abdullah and European Council President Michel reviewed opportunities to expand cooperation between Jordan and the EU, with His Majesty voicing appreciation for the continued development support provided by the EU.

The meeting, attended by His Royal Highness Prince Ghazi bin Muhammad, His Majesty’s chief adviser for religious and cultural affairs and personal envoy, covered recent regional and international developments, foremost of which is the Palestinian cause.

The King commended the EU’s position in support of peace between the Palestinians and the Israeli Occupation on the basis of the two-state solution.

His Majesty emphasised the need to support efforts to reach just and comprehensive peace, leading to the establishment of an independent Palestinian state on the 4 June 1967 lines, with East Jerusalem as its capital.

The King stressed that Jordan will continue exerting all efforts to safeguard Islamic and Christian holy sites in Jerusalem, under the Hashemite Custodianship.

For his part, European Council President Michel expressed the EU’s keenness to step up cooperation with Jordan, voicing appreciation for the Kingdom’s role in hosting refugees.

Director of the Office of His Majesty Jafar Hassan and Jordan’s Ambassador to Japan Lina Annab attended the meeting.

Fires break out in houses in Amman, ....