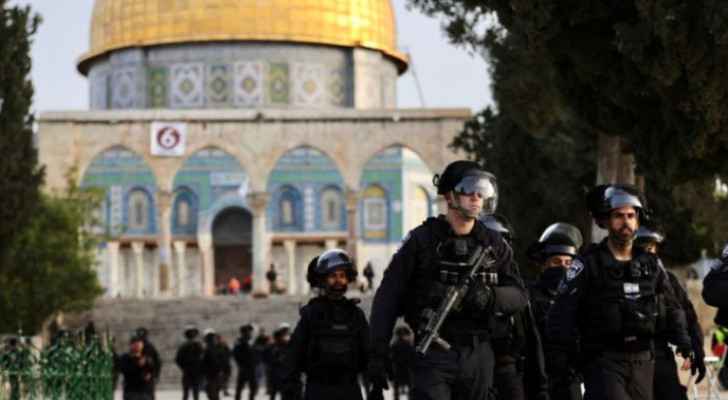 Two Palestinians inside Al-Aqsa Mosque were injured, and five others were arrested, as the Israeli Occupation forces and hundreds of extremist settlers stormed Al-Aqsa Mosque on Monday.

A statement was issued by the Jerusalem Islamic Waqf that said hundreds of settlers stormed Al-Aqsa Mosque from the Mughrabi Gate, with heavy protection from the Israeli Occupation forces.

All groups of settlers, each made up of 50 people, carried out Talmudic rituals and performed provocative tours in the courtyards of the mosque.

Additionally, the forces surrounded the mosque and intensified their military deployment in its courtyards, transforming the Old City into a military barracks, imposing strict restrictions on the entry of Palestinians to the mosque, and preventing Palestinians under the age of 40 from entering.

Some Israeli Occupation soldiers climbed the roof of the Qibli prayer hall as drones flew over the mosque to monitor the movement of Palestinians worshipers and those who were stationed.

Journalists were also attacked outside the mosque's gates, obstructed their work and prevented them from covering the events, forcing them to leave the site.