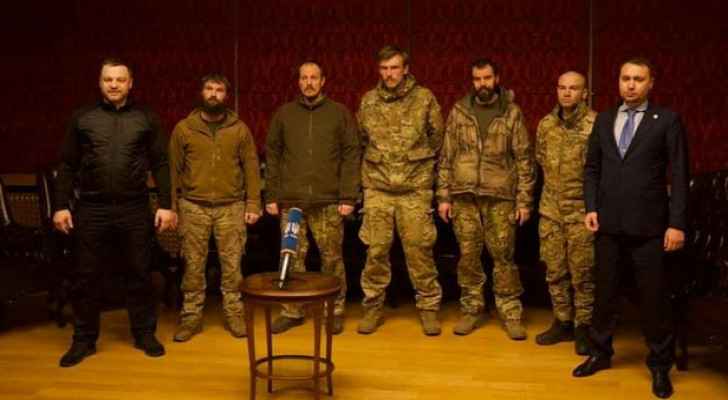 Ukraine on Wednesday announced the exchange of a record-high 215 imprisoned soldiers with Russia, including fighters who led the defense of Mariupol's Azovstal steel works that became an icon of Ukrainian resistance, according to AFP.

The swap is the biggest exchange between the warring sides since the start of Russia's military operation in February.

"We have managed to liberate 215 people," the Ukrainian presidency's chief of staff Andriy Yermak announced on television.

Zelensky said five military commanders including leaders of the defense of Azovstal were taken to Turkey as part of an operation prepared well in advance and agreed with Turkish President Recep Tayyip Erdogan.

The released prisoners will remain in Turkey "in total security and in comfortable conditions" until the end of the war, Zelensky added.

Ten prisoners of war including five Britons and two Americans, who were transferred from Russia to Saudi Arabia earlier on Wednesday, were part of the swap deal, Zelensky said.

On Tuesday, Erdogan told US television that Russia and Ukraine had agreed to swap 200 prisoners in one of the largest exchanges of the seven-month-old war.

Mariupol, a port city on the Sea of Azov in southeastern Ukraine, withstood weeks of relentless Russian bombardment, with resistance concentrated in a dense network of underground tunnels at its Azovstal steel plant.

Ukrainian forces' longstanding refusal to surrender despite shortages of ammunition and supplies earned them praise across the country for their heroism in defying overwhelming odds against Russia's superior numbers and firepower.