'Jordan has always been a source of regional stability': King Abdullah II

'Jordan has always been a source of regional stability': King Abdullah II 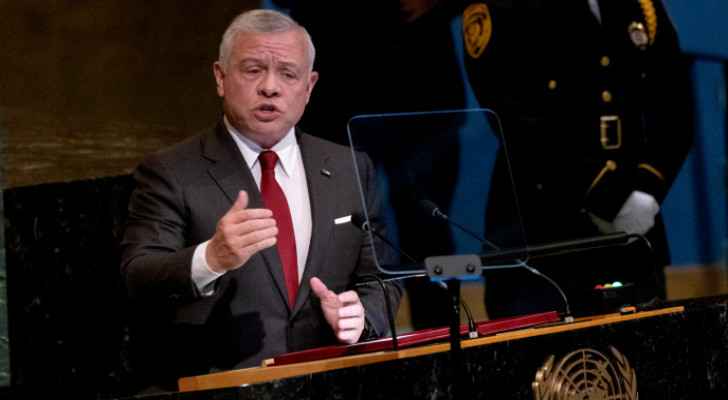 In a speech to the General Assembly, King Abdullah said the Palestinians cannot be denied their right to self-determination, noting that there is no place for hatred and division in Jerusalem.

His Majesty highlighted Christianity as an integral part of the region and the Holy Land.

The King added that no country can thrive if affordable food does not get to every family's table, stressing that regional resilience packs are coming together among countries in the region to stimulate fresh opportunities and growth.

His Majesty also cited Jordan as a bridge for regional partnerships and international crisis response.

Following is the full text of the King’s speech:

“In the name of God, the Compassionate, the Merciful

We meet today, in this General Assembly, as the alarm bells ring all around us. Numerous crises batter our world; crises that are increasingly interlocked—regional conflicts with international impact, devastating climate change, pandemic disruptions, extremist violence, spiralling inflation, looming recession, and—for all too many around the world—the growing reality of hunger. Developing countries have been hardest hit.

Is this the future we will leave to the generations yet to come?

We must deliver a different world—a world of expanded horizons, a more equitable world, sustainable economic growth, exciting new opportunities, more and better jobs, and the inclusive peace for prosperity, in which all people can thrive.

To reach these goals, our countries must unite behind effective, collaborative action. The question now is will we have the vision and determination to get the job done?

Consider the climate crisis. No country can heal our injured earth alone. We need global partnerships that can create real change. And Jordan is part of these efforts. We have been building strong partnerships to manage and sustain vital water resources. And we see more opportunities to work with partners to preserve precious world heritage sites and natural wonders—the unique Dead Sea, the sacred Jordan River, and the resilient coral reefs of the Gulf of Aqaba—which are all threatened by climate change.

Food security is another global priority. Hundreds of millions of people go to bed hungry, and the numbers are rising. How can parents raise healthy children? How can students learn? How can workers do their best, when they are hungry and hopeless?

Since the beginning of the pandemic, and now with the crisis in Ukraine, global supply chains have been disrupted. Many well-off countries experienced empty food shelves for the first time in living memory. They are discovering a truth that people in developing countries have known for a long time—for countries to thrive, affordable food must get to every family's table. On a global level, this demands collective measures to ensure fair access to affordable food, and speed the movement of staples to countries in need.

Sustainable, inclusive economic growth has too often been a victim of global crises, but it can also be a defence that strengthens us to endure the storms. In my region, we are looking to build integrated partnerships that tap the capabilities and resources of each of our countries for the benefit of all.

We see 'regional resilience packs' coming together to stimulate fresh opportunities and growth. Jordan has established multilateral partnerships with Egypt, Iraq, the UAE, Saudi Arabia, Bahrain, and others in the region to capitalise on these opportunities. Our country is a bridge for regional partnerships and cooperation, international crisis response, and humanitarian action.

Jordan has always been a source of regional stability, as well as a refuge for those in need. In this context, let me say a word about refugees and the communities which host them. In 2012, I came before the 67th General Assembly, and spoke for the first time about the Syrian refugee flow and its pressure on Jordan's scarce resources. At that point, 200,000 Syrians had sought refuge in our small country. Today, 10 years later, we host more than 1.3 million.

Meeting the needs of these and other refugees is an international responsibility, and host countries look to the international community to honour its commitments.

For decades, the Middle East has been synonymous with conflict and crisis. But we are hopeful that a new-found spirit of collaboration can make our region an exemplar of resilience and integration.

Though politics may sometimes fail our world, one absolute remains—always put people first. To keep hope alive for all peoples means rising above politics to ensure every individual’s prosperity. Such efforts will be fruitless if they are exclusionary. Inclusion of the Palestinian people in regional economic projects should be an integral part of our efforts.

In the Palestinian-Israeli conflict, peace continues to be elusive. Neither war nor diplomacy has held the answer to this historic tragedy.

It is the people themselves, not politics and politicians, who will have to come together and push their leaders to resolve this.

What would our world look like now if the conflict had been settled long ago? If walls had never gone up, and people had been allowed to build bridges of cooperation instead? What if extremists had never been able to exploit the injustices of occupation? How many generations of youth could have grown up in the optimism of peace and progress?

As we continue our efforts to achieve peace, we must not abandon refugees. This year, the General Assembly will vote on renewing UNRWA’s mandate. The international community should send a strong message of support for the rights of Palestinian refugees, ensuring that Palestinian refugee children have schools to go to, and access to appropriate medical care.

A founding UN principle is the right to self-determination for all peoples. The Palestinian people, with their resilient national identity, cannot be denied this right. And the road forward is the two-state solution, in accordance with UN resolutions—a sovereign, viable, and independent Palestinian state, on the 4th of June 1967 lines, with East Jerusalem as its capital, living side-by-side with Israel in peace, security, and prosperity.

Today, the future of Jerusalem is an urgent concern. The city is holy to billions of Muslims, Christians, and Jews around the world. Undermining Jerusalem’s legal and historical status quo triggers global tensions and deepens religious divides. The Holy City must not be a place for hatred and division.

As Custodians of Jerusalem's Muslim and Christian Holy Sites, we are committed to protecting their historical and legal status quo and to their safety and future. And as a Muslim leader, let me say clearly that we are committed to defending the rights, the precious heritage, and the historic identity of the Christian people of our region. Nowhere is that more important than in Jerusalem.

Today, Christianity in the Holy City is under fire. The rights of churches in Jerusalem are threatened. This cannot continue. Christianity is vital to the past and present of our region and the Holy Land. It must remain an integral part of our future.

We can weather the most serious crises if we join together.

Do let us, here in this General Assembly, honour our shared interest in a brighter future, a future of dignity and hope that brings new opportunities for all our peoples.

And let us not ignore the alarm bells ringing around us.
We must act.

The Jordanian delegation to the 77th session of the UNGA included Deputy Prime Minister and Foreign Minister Ayman Safadi, Director of the Office of His Majesty Jafar Hassan, Jordan’s Permanent Representative to the UN Mahmoud Hmoud, and Jordan’s Ambassador in Washington, DC, Dina Kawar.