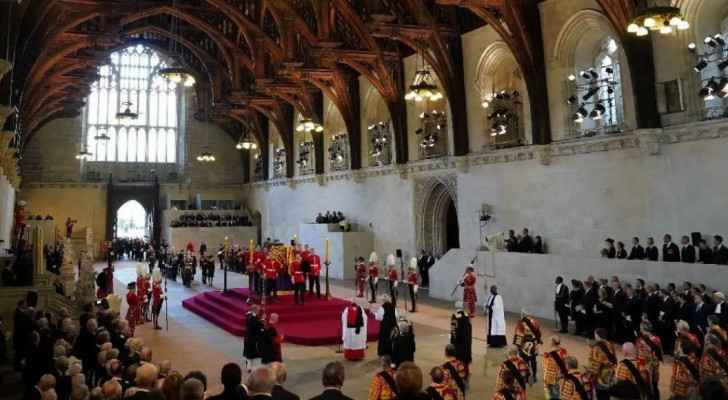 King Charles III welcomed world leaders to Buckingham Palace on Sunday ahead of the funeral of Queen Elizabeth II, as US President Joe Biden paid a final tribute to the late monarch.

Biden crossed himself and put his hand on his heart while he stood with his wife Jill on a gallery overlooking the flag-draped casket in London's cavernous Westminster Hall.

Members of the public filed by as time ticked down for them to pay their last respects to the only sovereign most Britons have ever known before she is laid to rest on Monday.

Biden said the queen, who reigned for a record-breaking 70 years until her death on September 8 aged 96, exemplified the "notion of service".

"To all the people of England, all the people of the United Kingdom, our hearts go out to you, and you were fortunate to have had her for 70 years, we all were. The world's better for her," Biden said after signing a book of condolences.

The US president then headed to Buckingham palace for a reception hosted by Charles for the dozens of leaders from Japan's reclusive Emperor Naruhito to France's Emmanuel Macron attending the funeral.

There was also a private audience at Buckingham Palace for Prime Minister Jacinda Ardern of New Zealand, which like Australia and 12 other Commonwealth realms now counts Charles as its sovereign.

"You could see that it meant a huge amount (to Charles) to have seen the sheer scale and outpouring of people's love and affection for her late Majesty," she told BBC television Sunday.

But in a sign of challenges ahead for the new king, Ardern added that she expected New Zealand to ditch the UK monarchy "over the course of my lifetime".

Members of the public were already camping out in advance to catch a glimpse of Monday's grand farewell at Westminster Abbey, which is expected to bring London to a standstill and be watched by billions of viewers worldwide.