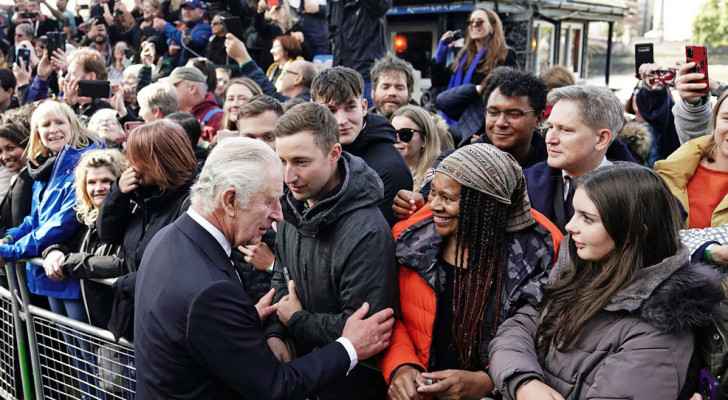 King Charles III and heir Prince William surprised crowds in queues stretching for kilometers by approaching and shaking hands with some who had waited hours for their last glimpse of Queen Elizabeth II's coffin ahead of Monday's funeral.

Two days before the "funeral of the century," for which foreign leaders have begun arriving, the waiting line along the River Thames to the Palace of Westminster in London was estimated at noon on Saturday at 14 hours.

For twenty minutes, King Charles III, accompanied by Prince William, approached the crowds flocking non-stop since Wednesday evening, shaking hands and exchanging a few words with others, as he did repeatedly during his week-long tour of the four provinces of the United Kingdom, England, Scotland and Ireland and North Wales.

The very popular Crown Prince thanked the attendees, inquiring about their health after the long wait, while chants of "I love you, William," sifted through the crowd.

London is preparing, amid intense measures, for its first official funeral since the death of former British Prime Minister Winston Churchill in 1965.

London police said the funeral would be the biggest ever security event, even bigger than the 2012 London Olympics.

In a rare incident during an often orderly and quiet funeral in Britain, a man was arrested on Friday evening after getting out of line and approaching the coffin, authorities said.

Crowds will have until 6:30 a.m. Monday (0530 GMT) to bid their farewell to a queen who has been a symbol of the country's unity and stability over a reign that lasted more than 70 years.

After that, the body will be taken Monday morning in a procession to Westminster Abbey where the funeral will be held at 10 GMT.

- Diplomatic move for the new king -

After a final walk, Queen Elizabeth II will be buried at St George's Chapel in Windsor Castle in west London, along with her father, King George VI, and her mother and husband Philip.

Ahead of the solemn funeral at Westminster Abbey, King Charles III will begin Saturday a diplomatic rush at Buckingham Palace.

In the afternoon, the prime ministers of the 14 commonwealth kingdoms, including Canadian Justin Trudeau, New Zealander Jacinda Ardern and Australian Anthony Albanese, will be received in the afternoon.

On Sunday afternoon, Charles III, who became king at the age of 73, will receive heads of state during a reception at Buckingham Palace.

Conservative Prime Minister Liz Truss, who took office about ten days ago, will meet a number of leaders before the funeral, including Joe Biden, Irish Prime Minister Michael Martin and Justin Trudeau.