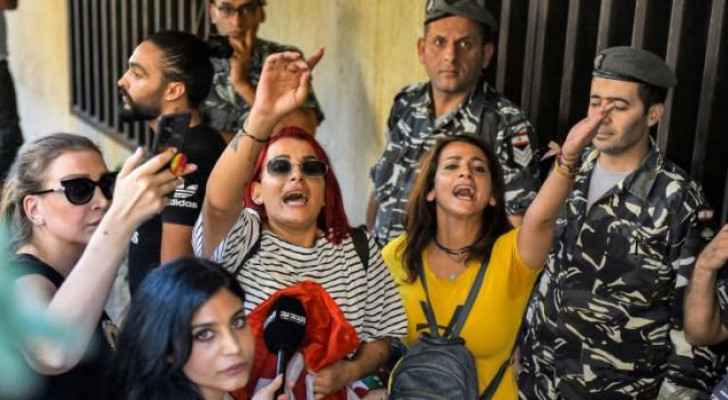 Friday, Lebanese depositors stormed at least five banks in different locations in attempts to recover part of their deposits, as part of a string of similar incidents in this country, which is under a stifling economic crisis.

With the escalation of the storming of banks on Friday, the Lebanese Interior Minister Bassam Mawlawi called for an emergency meeting of the Central Security Council to "discuss the security measures that can be taken."

Mawlawi told reporters after the meeting, "Restoring rights in this way... This is an issue that destroys the system and leads to the loss of the rest of the depositors' rights."

The Association of Lebanese Banks also issued a decision to close all banks for a period of three days, starting Monday, against the background of the incidents.

Since the fall of 2019, Lebanese banks have imposed strict restrictions on deposit withdrawals, with the value of the lira declining by more than ninety percent against the dollar. The World Bank ranked Lebanon's economic crisis among the worst in the world since 1850.

A few hours after the Friday incident, tension prevailed in the vicinity of one of the branches of "Blom Bank" in the Al-Tariq Al-Jadida neighborhood in Beirut, and the security forces were deployed.

Witnesses outside the bank branch reported that a shopkeeper, saddled with debt, forcibly broke into the bank and demanded his withheld deposit.

Witnesses from the scene told AFP that the man was detained inside the bank with police officers, and it is believed that he was not armed.

As tension eased in the Al-Tariq Al-Jadida area, another man was storming a bank in the Ramlet Al-Baida neighborhood, pointing a hunting rifle at the employees.

These incidents came after a depositor succeeded on Wednesday to obtain part of her deposit after she stormed a branch of BLOM BANK in Beirut, brandishing a weapon that later turned out to be plastic.

Depositor Sally Hafez, who wrote that she was seeking to raise money to pay for her sister's cancer treatment, was hailed as a hero online.

"She has every right to do this, and if she had the courage, she would have done the same," said Carla Chehab, a 28-year-old resident of Beirut.

"Don't let anyone call her a bank robber, she's not, thieves are the banks, the government and the class that protects them," she added.

The official Lebanese National News Agency stated that a man in an area in the city of Aley, northeast of Beirut, broke into a bank and took his deposit in one of the banks by force.

On August 11, an angry man entered a bank in the Hamra district of Beirut, garnered similar public solidarity, after holding employees for hours and demanding his money at gunpoint to pay for his father's treatment.

The economic crisis that Lebanon is witnessing is considered the worst in its history. More than eighty percent of Lebanon's population is below the poverty line, and the unemployment rate has touched nearly thirty percent.

On Friday, the session to approve the 2022 budget in the Lebanese Parliament was postponed to September 26, after losing the quorum following the withdrawal of MPs from the session.

During the past two years, waiting halls in banks witnessed repeated problems between angry citizens wishing to obtain their deposits and employees who adhered to the instructions of their administrations.

Operations suspended at all banks across Jordan Thursday: ....

Operations suspended at all banks across Jordan ....

Operations suspended at all banks across Jordan ....

Operations suspended at all banks ....

CBJ: Bank loan installments for June not to be postponed