Rescue operations at site of collapsed building in Al-Weibdeh 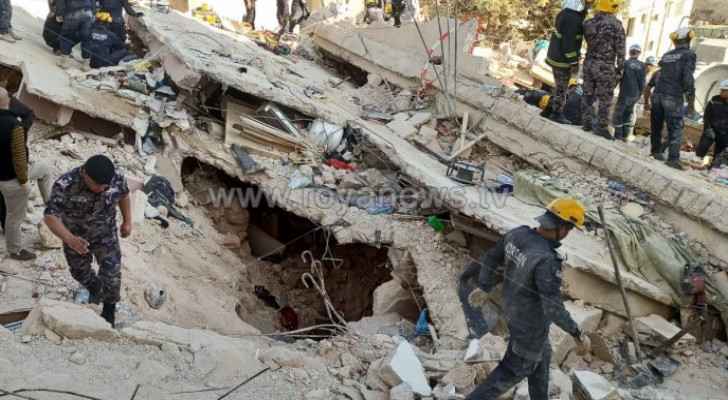 Rescue operations are currently underway to save the last person who is still trapped underneath the rubble of the collapsed building in Al-Weibdeh area in Amman.

Earlier on Friday, three bodies were pulled out from under the rubble, bringing the total number of those who died in Al-Weibdeh tragedy to 13.

Around 10 others were injured following the collapse. Several people were pulled out alive.

On Sep. 13, 2022 – a date Jordanians will never forget – a four-story residential building collapsed in one of the most famous neighborhoods in Amman.

After the incident occurred, an eyewitness told Roya that “I was driving when I heard something like a bomb explosion. I looked to my left and saw a building collapsing. When the building collapsed, I immediately stopped the car, and started running to see what’s going on.”

Jordan’s Prime Minister Bisher Al-Khasawneh directed the competent authorities to open an investigation to determine the causes of the collapse.

The Public prosecutor ordered the arrest of three people. The trio were said to be the building's manager as well as two other people involved in maintenance work that was supposed to have been carried out on the structure.
Deputy Prime Minister Tawfiq Kreishan said that “among the reasons for the collapse of the building is that it is old and dilapidated.”

However, the main cause of the collapse remains unclear.

A mother, Abeer, lost her three children in the collapse of the building. Her three children, one boy and two girls, were at home at the time of the incident, while she went to buy some things for a birthday party for her daughter's friend.

After 24 hours of the collapse, a four-month-old baby girl, Malak, was pulled out alive from under the rubble.

The survival of Malak -- 'Angel' in English -- heralded some relief for many Jordanians who watched the disaster unfold.

Video footage shared by the civil defense directorate showed rescue workers extracting the little girl from a narrow gap in the debris.

She sustained only minor bruises.

For fourth day, rescue operations continue at site of ....