Tears for Queen Elizabeth II as coffin rests in Scotland

Tears for Queen Elizabeth II as coffin rests in Scotland 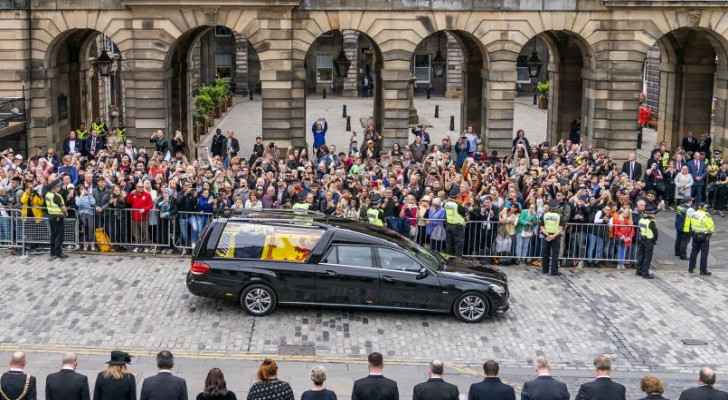 Mourners in Edinburgh, some in tears, filed past the coffin of Queen Elizabeth II through the night, before new king Charles III travels to Northern Ireland Tuesday and the monarch's coffin returns to London, according to AFP.

As people paid their respects, four members of the monarch's Scottish bodyguard, the Royal Company of Archers, stood heads bowed at each corner of the oak casket resting in the 12th century St Giles' Cathedral.

The king then joined his siblings in a vigil, with the coffin draped in the Royal Standard of Scotland and topped with a wreath including heather from Balmoral, and the ancient Crown of Scotland.

Anne will on Tuesday accompany Elizabeth's body on the next leg of its journey south from Edinburgh to an airfield near London by Royal Air Force jet.

Crowds of mourners are expected to line the route into the city as the coffin is driven to Buckingham Palace for more than four days' lying in state ahead of her funeral next Monday.

The king, meanwhile, will make his first trip to Northern Ireland since his accession, followed by Wales on Friday.

In a show of national togetherness as he embarks on his kingship -- a role for which he has spent a lifetime preparing -- Charles has pledged to visit all four nations of the United Kingdom.

The queen's coffin had on Sunday been driven to the Scottish capital from the Balmoral estate where she died, and held overnight at the royal residence of the Palace of Holyroodhouse.

Accompanied by kilted soldiers, the late queen was taken from the royal residence to St Giles' for a prayer service.

Thousands of people lined the route along the Royal Mile to watch the procession make its way to the ancient place of worship as cannon fired at one-minute intervals from Edinburgh Castle.

The royals were joined by Prime Minister Liz Truss and Scottish First Minister Nicola Sturgeon at the service for the monarch who reigned a record-breaking 70 years.

Members of the public who queued for hours spoke of their deep emotions after they finally got to file by the coffin.

"It's a real sense of connection to history, and bear in mind that we're one of the few countries left with this sense of pageantry and connection to the past," said Rob Parsons, 28, after emerging from the cathedral.

"Seeing her obviously is a way of accepting the fact that it's the end of an era."

Prince Andrew was not wearing his military uniform, unlike his siblings, after stepping back from public life following a scandal over his links to US sex offender Jeffrey Epstein.

But his presence represented a united front, as did the joint appearance at the weekend by Charles' warring sons William and Harry who surveyed flowers and cards left outside Windsor Castle.

Harry, the youngest, who renounced royal duties in 2020 and moved to the United States, had earlier paid tribute to his grandmother, calling her his "guiding compass".

"You are already sorely missed," the 37-year-old said in his first statement since her death on Thursday, adding that he and his American wife Meghan "now honour my father in his new role".

Ahead of the king's visit to Northern Ireland, people there expressed sadness at the queen's death at the age of 96 last Thursday, saying they felt the loss as if they had known her personally.

"We’ve been followers of the royal family my whole life. And I think it's just very heartbreaking that we've lost the queen –- it feels like a member of my family," said Christine Flynn, 37, paying her respects at Belfast's Platinum Jubilee mural which has become a focus for mourners in the city.

"We just wanted to come down and show our love for her. She's all we've ever known, all the country's ever known. We feel like we all know her personally," added Joanne Booth, 36, visiting Hillsborough Castle with her husband and 16-month-old daughter.

While large crowds are expected to welcome Charles in Northern Ireland Tuesday, the visit to the deeply divided region scarred by sectarian violence could prove testing.

Charles will meet Belfast's feuding political leaders -- split between fiercely loyal unionists and nationalists who want to reunify with Ireland -- before attending an Anglican religious service in the city.

The president, prime minister and foreign minister of Ireland are also set to attend.

Huge queues are expected to form to see the queen's coffin in London over coming days.

The casket is due to be taken atop a gun carriage from Buckingham Palace to parliament's 900-year-old Westminster Hall on Wednesday.

Around 750,000 people are expected, while the first mourners arrived for the queue on Monday -- more than 48 hours before the line opens.

The queue is expected to snake for several miles (kilometres) along the banks of the River Thames.

"It's going to be emotional and I don't know how I'll feel going in there as the first one," said Vanessa Nanthakumaran, a 56-year-old administration assistant originally from Sri Lanka.

"It's going to be a once-in-a-lifetime chance to be part of this unique event," she told AFP.

Britain has been plunged into grief by the death of Elizabeth II, who has been a fixture of the nation's life and consciousness for seven decades.

Charles has seen his popularity recover since the death of his former wife Diana in a 1997 car crash. But he has been embroiled in several scandals in recent years.

He takes the throne at a moment of deep anxiety in Britain over the spiralling cost of living and international instability caused by the war in Ukraine.

With republican movements gaining ground from Australia to the Bahamas, the new king also faces a challenge keeping the Commonwealth realms in the royal fold.

Scottish, Welsh sport to be 'spectator-free' to combat ....