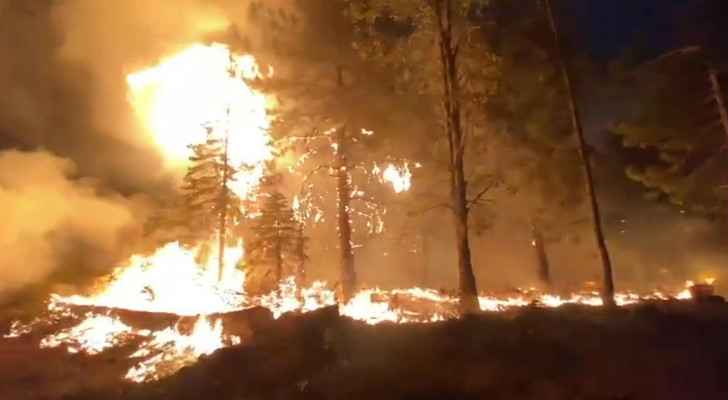 California's latest wildfire has spread rapidly in the US state's central mountains, just as firefighters were bringing a big blaze south of Los Angeles under control, authorities said Sunday.

The Mosquito Fire has now swept through an area of more than 41,000 acres (16,600 hectares) in the Sierra Nevada range northeast of San Francisco in just four days, the official Cal Fire website reported.

It said while cooler temperatures -- following more than a week of blistering heat -- had somewhat slowed the fire's progress, stronger winds were pushing it to the north and northeast, threatening hundreds of homes.

With the small town of Foresthill facing a growing threat, "several more evacuation orders and warnings have been issued," Cal Fire said.

The towns of Georgetown, Volcanoville and Bottle Hill were ordered to evacuate earlier, the daily Sacramento Bee reported.

"This is the fourth time we've been evacuated up here," Josh Manzer of Volcanoville told the Bee, "but this is the worst of it."

"Even the access roads, which normally are throughout those areas, don't exist."

On Saturday, firefighters were able to beat back the massive Fairview Fire south of Los Angeles after a tropical storm brought rains and cooler temperatures, authorities said.

Officials said that fire -- which came amid a ferocious heat wave scorching the US southwest -- had claimed two lives and destroyed 20 buildings.

The western United States is more than two decades into a historic drought that scientists say is being worsened by human-made climate change.

Much of the countryside is parched and overgrown, creating the conditions for hot, fast and destructive wildfires.

Western US heat wave to wane, but more fire danger ahead: ....

Western US heat wave to wane, but more fire ....

Western US heat wave to wane, but more fire ....

At least six dead in California ....