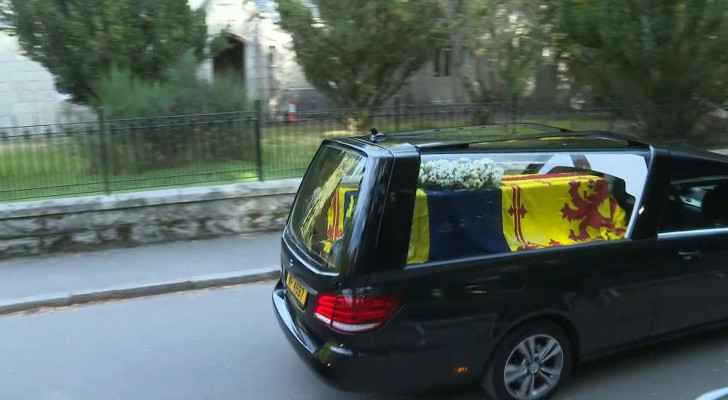 Queen Elizabeth II's coffin will travel by road through Scottish towns and villages on Sunday as it begins its final journey from her beloved Scottish retreat of Balmoral.

Mourners are expected to line the streets to watch a hearse carrying her oak coffin wend its way through Aberdeenshire, Aberdeen and Dundee on the way to Edinburgh.

Here is a timeline of the 180-mile (290-kilometer) journey through Scotland's northeastern and eastern countryside, which will last at least six hours:

The queen's coffin has been kept at Balmoral, draped in the Scottish royal standard and a wreath, since she died on Thursday aged 96.

After the coffin is carried to the hearse by six Balmoral estate gamekeepers, the cortege will head to the nearby town of Ballater, arriving at 10:12 am for officials from the county of Aberdeenshire to pay tribute.

The coffin will be accompanied by The Earl of Dalhousie and the minister of Crathie Kirk, a church she attended when in residence at Balmoral.

After another tribute by local officials there will be a public viewing at the city's historic Duthie Park.

The cortege will arrive in Dundee on the east coast, Scotland's fourth city. Civic leaders will stand on a raised platform to bid farewell to her.

On the way to Edinburgh it will pass over a road bridge running parallel to the iconic Forth Bridge, which takes trains over the huge Firth of Forth estuary.

The queen's coffin is due to arrive at the 500-year-old Palace of Holyroodhouse, at the foot of Arthur's Seat hill in Edinburgh, where it will be received by a guard of honor.

People are expected to line the route from the north of the city into the center. Scotland's First Minister Nicola Sturgeon and party leaders will gather at parliament to watch the coffin passing.

On Monday, the coffin will be carried in procession along the Royal Mile street to St Giles' Cathedral, where it will rest for 24 hours after a service.
On Tuesday the queen's coffin will be flown to London.

Two police officers stabbed in London ahead of queen's ....