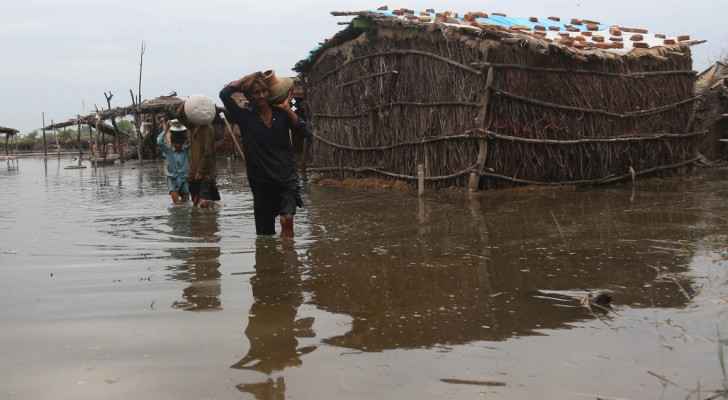 Pakistani farmers are still counting their losses due to the devastating floods that inundated a third of the country, but the long-term consequences of the disaster are already evident.

"It took us 50 years back in time," says farmer Ashraf Ali Banbro, who was wiped out by the floods on nearly 1,000 hectares of cotton and sugarcane that he would soon harvest.

More than 33 million people have been affected by the floods caused by monsoon rains, which have fallen "more than ten times more than usual since mid-June", according to the European Space Agency. Sindh province in southern Pakistan is one of the worst affected areas.

The Indus River divides the region, and agriculture flourished on its banks for thousands of years, and its irrigation systems date back to the fourth millennium BC.

Record amounts of rain fell on the region, but there was no way to drain it because the level of the flow of the Indus reached its peak, its tributaries swelled to the north, and its banks overflowed in several places.

"At one point, it rained non-stop for 72 hours," Banbrow said, noting that he lost at least 270 million rupees ($1.2 million) in investment.

"Those were the costs of fertilizers and pesticides (...) not including the profit that would have already been much higher because the yield would have been bountiful," he explains.

Unless the farmland dries up, farmers like Banpro will not be able to sow winter wheat, which is essential to ensuring food security in Pakistan.

"We have one month. If the water does not dry out during this period, there will be no wheat," he adds from his farm in the village of Samu Khan, some 40 kilometers northeast of the city of Sukkar.

Pakistan has been self-sufficient for years in terms of wheat production, but has recently begun to rely on exports to ensure silos are full as part of its strategic reserves.

Islamabad can hardly afford the imports, even if it buys grain at a discount from Russia as it is currently being discussed.

The country borrowed billions from foreign lenders. And last week it managed to persuade the International Monetary Fund to resume financing that cannot be used to pay off external debts, nor even to offset nearly $10 billion in flood damage.

On an elevated highway heading from Sukkar to Samu Khan, a scene of shocking devastation wrought by the floods appears.

The water extends, in some places, as far as the eye can see. In the few places where cotton still appears, its leaves are brown, and hardly any almonds are visible.

Large landowners are likely to outgrow the damage caused by the floods, but tens of thousands of farm workers are facing dire difficulties.

Many are paid only for what they harvest, and they increase their profits by farming in small plots in villages scattered throughout the region. However, these lands are also under water, and tens of thousands have fled their homes to seek refuge in higher ground.

"There is nothing left to harvest," says Saeed Baloch, who works every season with members of his family.

It is not only farmers who are affected, but also every member of the supply chain.

"We are cursed," says Waseem Ahmed, a cotton trader for Bat Saleh. Ahmed, like many others, had paid in advance to hedge against inflation and market volatility.

"He harvested only about 1,360 kilograms out of about 7,465," he added, noting that he had put off plans to expand his business.

In a small shop in a normally lively cotton market in Sindh, boys check a pile of wet cotton, to check if anything can be salvaged.

"The market is closed, even the ginning factories are closed," says merchant Ahmed, pointing to a chain of closed shops.

Overwhelmed with helplessness, he hopes for divine intervention to get help.