Flood-born: Nothing but mud as mother, infant return to Pakistan home

Flood-born: Nothing but mud as mother, infant return to Pakistan home 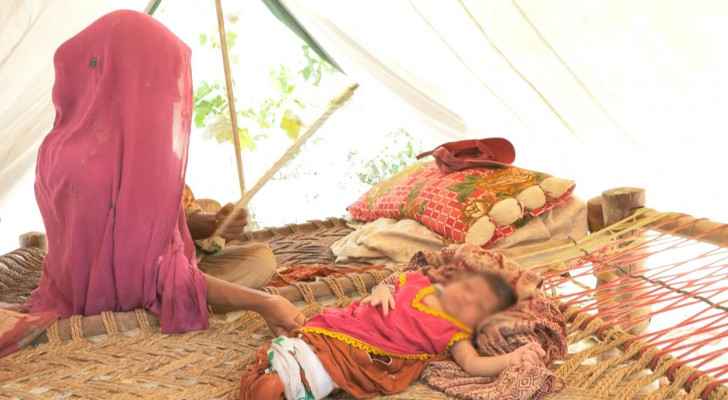 Swaddled tightly under the shelter of a donated tent, a newborn baby lays still amid the disorder all around.

Her mother, Hajira Bibi, flits between checking on the 10-day-old girl -- so young she's yet to be named -- and attempting to clean away the ankle-high mud left behind in her home by the floods that forced her family to shelter on the hard shoulder of a motorway.

"I took her up on the motorway when she was only four days old... she was so small," Bibi told AFP about their weekend evacuation.

"She was sick and her eyes were hurting, suffering from a fever too, my baby was in deep trouble because of the heat."

Similar scenes are playing out across Pakistan following record monsoon rains that have flooded over a third of the country, affecting more than 33 million people.

UNICEF says 16 million children are impacted and 3.4 million are in need of humanitarian support.

Still recovering from the birth, Bibi had to be helped up the steep slope as warnings arrived that the Kabul River was about to burst its banks because of torrential rains further north.

In this village near Charsadda in northwest Pakistan, the sun was scorching when they fled to A-frame tents handed out to families.

They slept there for days in the open air, with no fans, no running water and nothing to bat away the mosquitos.

When the shoulder-high floodwater receded, a dark brown sludge had coated everything in their three-room home, their feet sinking into it.

"We just want our house to be fixed. It's painful to see the children laying here," said Bibi, who hopes for a doctor to reach the extended family of around 15.

It is common in rural parts of Pakistan for birthdays to not be precisely recorded, but Bibi believes the baby was born about four days before the floods and is now around 10 days old.

She is unsure of her own exact age, putting herself at around 18 -- quietly explaining that she was only around 12 when she gave birth to her first baby.

They have now moved their tents to drier ground outside their home, the children sharing wooden charpoy beds.

The environment is ripe for a breakout of infections.

The water pump is broken, so the adults have not showered in clean water for nearly a week.

Children swim in the small pools of floodwater where buffalo bathe and pass urine.

"The flood has passed but the water was very dirty, very muddy, all these children have rashes and their health is getting worse and worse," said
Naveed Afzal, Bibi's husband, who since the floods can no longer find work as a day laborer.

On their feet and shins, adults display sores they say have tripled in size in just a couple of days.

A young boy has watery red eyes, another has a fever.

The baby, at least, is washed in the few bottles of mineral water collected from donation points that the men spend hours walking to each day.

Many link roads have been cut off by standing floodwater.

"I haven't yet lost hope but this baby girl is so small that it would be better to return home and settle down," said Bibi, cradling the infant in her arms.