Minister of Health: We will continue to provide the best services to patients, visitors

Minister of Health: We will continue to provide the best services to patients, visitors 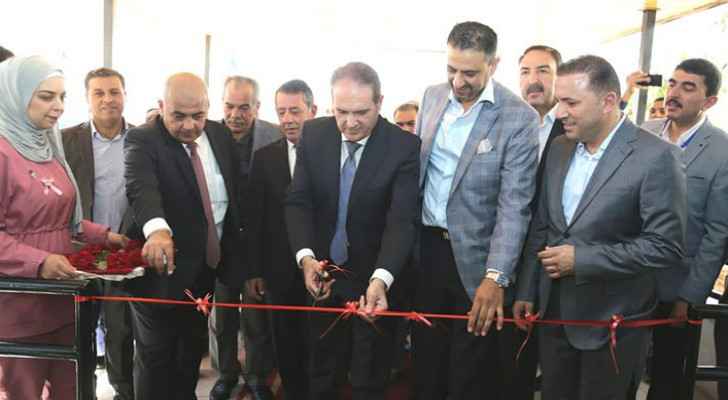 Minister of Health, Dr. Firas Al-Hawari, affirmed that the Ministry is continuing to improve the level of its health services in all its centers and hospitals, in addition to raising the efficiency and readiness of its infrastructure to provide the best services to patients and visitors.

This came during the inauguration of the MRI unit at Ramtha Governmental Hospital, which was established with the support of the United States of America.

Al-Hawari said that the magnetic resonance imaging unit will provide its services to about 260,000 people from inside the Ramtha District, including about 70,000 Syrian refugees and about 50,000 people from neighboring governorates.

The Minister of Health added that the new resonance unit would keep pace with the increasing number of patients and auditors who need to perform this type of radiograph, pointing out that this will reduce the pressure of appointments for the Ministry's hospitals in Irbid Governorate, and reduce waiting times for patients.

Al-Hawari indicated that Al-Ramtha Hospital will be supplied with a number of medical devices and will improve some of the old hospital buildings through projects approved by the provincial council in its budget.

He also visited the comprehensive health center of the Houran plain, and the first Amrawa, and was briefed on the reality of the services provided in these centers and listened to the observations of a number of parents, auditors and patients.

Al-Hawari listened to a briefing from the director of Ramtha Hospital, Dr. Abdulaziz Al-Thiabat, about the work of the hospital and its departments, and an explanation of the newly developed resonance unit that uses magnetic field imaging technology as an advanced diagnostic method to examine organs and tissues inside the body.

Al-Dhiabat said that this device, which cost 1.2 million dinars, will make a qualitative leap in the level of the hospital's medical and health services provided to citizens.

It will also save patients time, effort and suffering, especially those who were referred to other hospitals in the governorate.

He explained that before the opening of the resonance unit, the patient needed 3 months to obtain a picture, but now the period will not exceed 3 weeks, indicating that he will hold courses for a number of doctors and technicians in order to work on this modern device.

Al-Thiabat indicated that 100,000 dinars were allocated for the purpose of supplying modern medical devices needed by the hospital, including units: fragmentation of stones, ear examination, and sterilization, indicating that the occupancy rate in the hospital reached 60 percent.

Al-Dhiabat said that the hospital’s ambulance department is experiencing great pressure, as it reviews from 600 to 700 cases daily, while only two doctors work in it around the clock, in addition to residents of internal medicine, surgery, children and some other specialties, as well as endocrinologists, surgeons, gastroenterologists and psychiatrists.

The Minister was accompanied during the visit by the Secretary-General of the Ministry of Health for Administrative and Technical Affairs, Dr. Elham Khreisat, for Primary Health Care and Epidemiology, Dr. Raed Al-Shboul, and a number of Irbid Governorate representatives, the Director of the Primary Health Care Department, Dr. Riyadh Al-Shayyab, the Director of the Technical Affairs and Hospitals Department, Dr. Imad Abu Yaqeen, and the Director of Ramtha Health Dr. Dhaher Al-Balas, and members of the provincial council.