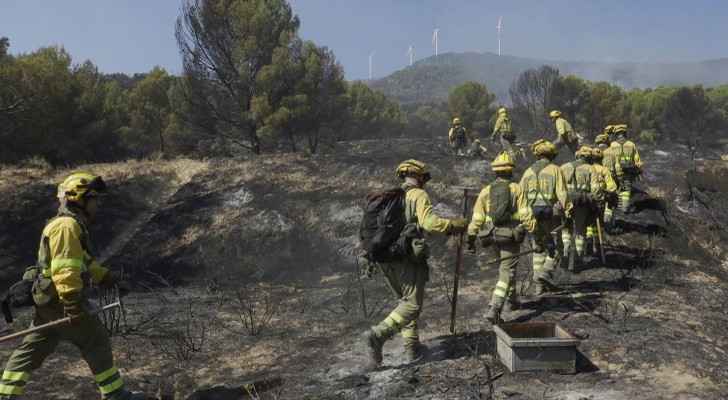 Firefighters were battling strong winds Monday as a huge forest fire burnt out of control in southeastern Spain while another blaze in the north was stabilized, officials said Saturday.

Both fires broke out late Saturday, with more than 350 firefighters engaged against the wildfire in the northern Aragon region that has so far devastated an area of 6,000 hectares forcing at least 1,500 people from their homes.

But as they managed to steady the Aragon blaze after successfully preventing it from entering a protected nature reserve, the wildfire in the southeastern Valencia region continued to spread.

Hundreds of firefighters backed by 25 planes and helicopters were tackling the flames in the Vall de Ebo, 50 kilometers (30 miles) north of the coastal resort of Benidorm.

So far, more than 6,500 hectares of land have been destroyed and more than 1,200 fled from their homes, with firefighting efforts complicated by strong winds in terrain that is difficult to access, the regional administration said.

"It is a very complex fire and very complicated terrain. We evacuated more than 1,000 people yesterday and last night, we had to evacuate 70 or 80 more homes," regional emergency chief Jose Maria Angel told Cadena SER radio saying the fire's perimeter was "progressively increasing".

In the Aragon blaze, officials had feared the flames could reach the Moncayo nature reserve some 80 kilometers west of Zaragoza but that had been successfully headed off, with officials saying Monday the situation was "evolving favorably".

With the winds expected to drop during the day after a blustery weekend, civil protection officials said they were hopeful the stabilization of the fire could see the 1,500 evacuees return home.

So far this year, Spain has suffered 390 wildfires, fuelled by scorching temperatures and drought conditions, which have destroyed a total of 265,467 hectares of land, according to latest figures from the European Forest Fire Information System.

Fires have blazed across Europe including in France, Greece and Portugal, making 2022 a record year for wildfires on the continent.