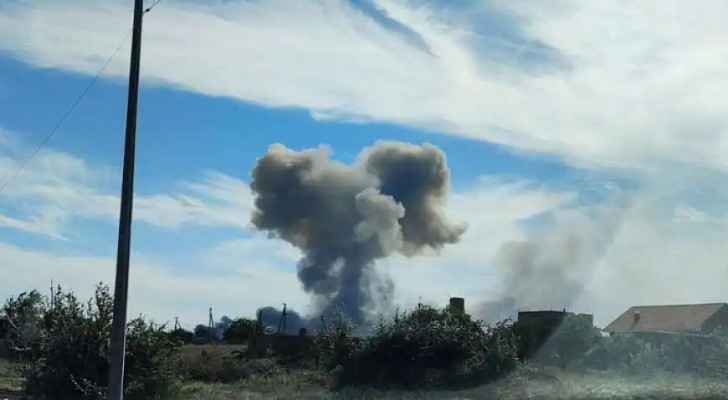 Moscow insisted Tuesday that major blasts at a key military airbase on the Russian-annexed Crimea peninsula were caused by exploding ammunition rather than Ukrainian fire.

The blasts rocked the Saki airfield on the 167th day of Moscow's military operation.

Russia annexed the Crimean peninsula in 2014 and has used the region as a staging ground for its attacks on Ukraine, but it has rarely been a target for Ukrainian forces.

The Russian defense ministry said "several aviation munitions detonated" at the base in an incident the head of the region said had left one person dead.

Local health officials earlier said five people, including one child, had been injured.

The defense ministry said it was looking to establish the reason for the explosions but indicated the airfield was not targeted in an attack.

There was no immediate reaction from Kyiv.

Ukraine's army, which for months pleaded for long-range artillery from Western allies, has been hitting targets deeper in Russian-held territory since some started arriving in recent weeks.

Kyiv has also taken credit for several acts of sabotage inside Russian-held territory.

Moscow seized Crimea from Ukraine in the wake of massive nationwide street demonstrations that led to the ouster of a Kremlin-friendly president.

Those protests precipitated fighting between the army and Moscow-backed separatists in eastern Ukraine, which would lay the groundwork for Moscow's full-scale assault on February 24 this year.

The operation has left thousands dead, forced millions in Ukraine from their homes, and littered the country with land mines.

On Tuesday, the United States announced that it will provide $89 million for demining efforts in Ukraine.

"Russia's unlawful and unprovoked further invasion of Ukraine has littered massive swaths of the country with landmines, unexploded ordnance, and improvised explosive devices," the State Department said in a statement.

"These explosive hazards block access to fertile farmland, delay reconstruction efforts, prevent displaced communities from returning to their homes, and continue to kill and maim innocent Ukrainian civilians," it said.