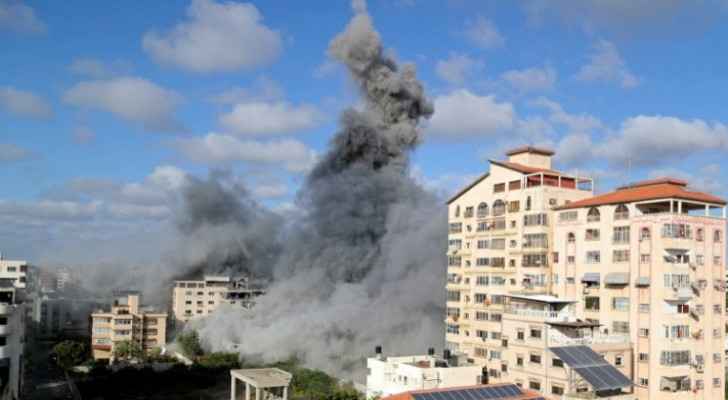 The Islamic Jihad movement said that the Israeli Occupation bears full responsibility for the raid it launched on Friday on several sites in the Gaza Strip.

The Islamic Jihad added in a statement that the movement will not compromise in responding to the aggression, which represents a declaration of war against the Palestinians, calling on all the resistance forces and their military wings to stand on one front and one trench to respond to the aggression and confront terrorism.

The following is the text of the statement as received:

With the highest meanings of steadfastness, the Islamic Jihad Movement in Palestine and its military wing, Saraya Al-Quds, mourns a group of our heroic people and our righteous Mujahideen (Islamic guerrilla fighters) who were martyred following the treacherous Zionist raids that targeted the beloved Gaza Strip. Mahmoud, the commander of the Al-Quds Brigades in the northern region of the Gaza Strip, and a number of Mujahideen and citizens, including a five-year-old girl, rose to prominence.

This treacherous Zionist crime came to hamper mediation efforts and endeavors to end the current state of tension following the brutal attack on Sheikh Bassam al-Saadi and his family in Jenin.

The enemy bears full responsibility for this crime, and we will not tolerate in responding to this aggression, which represents a declaration of war on our people in all its places of existence, and we call on all the resistance forces and their military wings to stand in one front and one trench to respond to this aggression and confront this terrorism.

The facts, evidence, and days will prove that these crimes will not fail the resistance, and the pure blood of the Mujahideen who dedicated their lives in defense of Palestine will be a new witness to the epic of steadfastness in which our people are victorious, and in which the Al-Quds and Resistance Brigades prove that, God willing, they are capable of confrontation and achieving victory over the usurping enemies.

“And God will help him who helps him, for God is strong, mighty.”