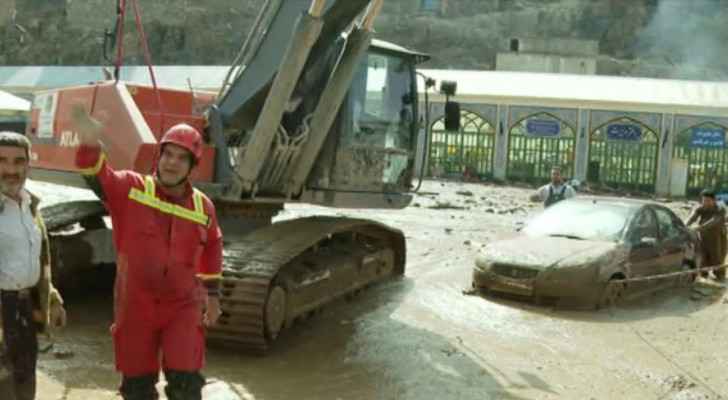 At least six people were killed in floods near Tehran Thursday, most in a landslide that dumped mud four meters deep in a village west of the capital, emergency services said.

The flash flooding near the capital, in the foothills of the Alborz mountains, comes less than a week after floods in the normally arid south of Iran left 22 people dead.

Footage from the village of Emamzadeh Davoud posted on social media showed a teenager caked in mud clinging to a pole as a roaring spate of debris-filled water rushed past him. A wall is seen collapsing moments later.

"So far, five people have been confirmed dead and nine injured by the floods in Emamzadeh Davoud," Iranian Red Crescent chief Pirhossein Kolivand told state television, adding that several vehicles had been swept away.

East of the capital, in Damavand, a body was recovered from floodwaters, state news agency IRNA reported.

Interior Minister Ahmad Vahidi said that parts of Emamzadeh Davoud had been buried under up to four meters (13 feet) of mud.

He also gave orders for the search for survivors to continue in several parts of Tehran province.

In 2019, heavy rains in southern Iran killed at least 76 people and caused damage estimated at more than $2 billion.

Iran says it won't be rushed into 'quick' nuclear deal