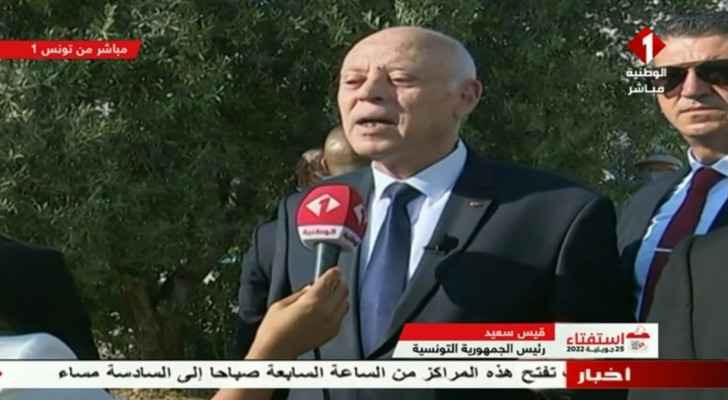 Tunisians began voting Monday on a constitution seen as a referendum on President Kais Saied, whose charter would give his office nearly unchecked powers in a break with the country's post-2011 democratic trend.

At one polling station at a school in central Tunis, six voters waited outside as voting began, the entrance guarded by two soldiers with assault rifles, alongside a small group of police.

The referendum -- a brainchild of the president -- comes a year to the day after Saied sacked the government and froze parliament in a dramatic power grab, as Tunisia grappled with surging coronavirus cases on top of political and economic crises.

Some 9.3 million out of Tunisia's 12 million people -- civilians aged over 18 -- have opted in or been automatically registered to vote, according to the ISIE electoral commission.

They include around 356,000 registered overseas, for whom polling began on Saturday.

Many Tunisians welcomed the president's moves last year against political parties and the often-deadlocked parliament, part of a system long praised as the only democracy to have emerged from the 2011 Arab uprisings.

But after a year of one-man rule in which he has vastly extended his powers and made little progress on tackling deep economic woes, Saied's personal popularity will be under the spotlight.

‘My family will not see me compete in Wimbledon final’: ....

‘My family will not see me compete in Wimbledon ....

‘My family will not see me compete in Wimbledon ....

Polling stations safe and will not spread the virus: ....

Polling stations safe and will not spread the ....

Polling stations safe and will not spread the ....

Polling stations safe and will not ....