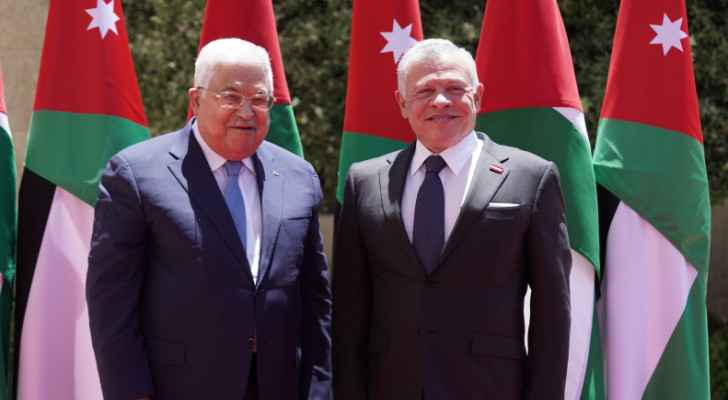 His Majesty King Abdullah on Sunday received Palestinian President Mahmoud Abbas and stressed the importance of joint Jordanian-Palestinian action at all levels to build on the diplomatic momentum in the region following US President Joe Biden’s visit and the Jeddah Security and Development Summit.

King Abdullah noted the need to continue Jordanian-Palestinian coordination, especially ahead of the United Nation’s General Assembly meetings in September, highlighting Jordan’s keenness to reaffirm the centrality of the Palestinian cause before the international community.

During the meeting, held at Al Husseiniya Palace and attended by His Royal Highness Crown Prince Al Hussein bin Abdullah II, His Majesty said Jordan is committed to maintaining coordination with Arab countries to support the Palestinian cause, stressing the need to include the Palestinians in regional projects, while empowering them and supporting their steadfastness.

The King reaffirmed Jordan’s full support for the Palestinians as they seek their just and legitimate rights, underscoring that the Kingdom will continue all its efforts to safeguard Islamic and Christian holy sites in Jerusalem, under the Hashemite Custodianship.

The meeting covered developments in the region, especially the upcoming Israeli Occupation elections and their impact on prospects of resuming peace talks between the Palestinians and those from the Israeli Occupation.

Discussions also addressed the importance of maintaining Jordanian-Palestinian coordination to alleviate Israeli Occupation obstacles that cause overcrowding at the King Hussein Bridge.

For his part, President Abbas commended His Majesty’s ongoing efforts to create a political horizon to resolve the Palestinian issue and Jordan’s keenness on including the Palestinian National Authority in regional projects.

'Jordan has always been a source of regional stability': ....

'Jordan has always been a source of ....

Both peoples have deep, ancient roots in this land: Biden ....

Both peoples have deep, ancient roots in this ....

Both peoples have deep, ancient roots in this ....

Both peoples have deep, ancient roots ....