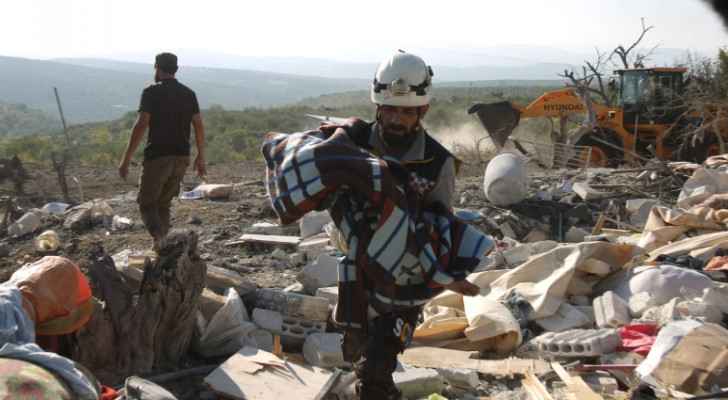 Seven people, including four siblings, were killed, on Friday, as a result of raids launched by Russian warplanes in Idlib Governorate in northwestern Syria, according to the Syrian Observatory for Human Rights.

At dawn on Friday, the raids targeted the outskirts of the village of Al-Yaqoubia and a house in the village of Al-Jadida in the western countryside of Idlib, according to the observatory, which indicated that two men and an unidentified person were among the dead.

Ayman Mozan, 31, lost his three daughters and a son in the attack that destroyed his home.

"My children are gone, they are dead, the dearest thing to my heart is gone," the grieving father told AFP.

The attack took place while Ayman and his family were sleeping in their home in the village of Al-Jadida in Jisr Al-Shughur in the western countryside of Idlib.

After the first strike, Muzan was able to rescue his wife from under the rubble, but he did not find his children.

"I thought it was a nightmare. We crawled out [before the second strike]," he added.

An AFP correspondent in the area said that the house was completely destroyed, and toys and clothes were scattered among the rubble.

The observatory spoke of "injured and trapped under the rubble, including women and children," most of whom are displaced from the Al-Ghab Plain area in Hama countryside.

"All the (dead) children are under the age of 10," Observatory director Rami Abdel Rahman told AFP.

Since March 6, 2020, a ceasefire has been in effect in the areas controlled by the factions in Idlib (northwest) and parts of neighboring provinces, including the western countryside of Aleppo, announced by Moscow, an ally of Damascus, and Turkey, which supports the fighting factions, after a massive attack by the regime forces that forced nearly a million people to flee from region, according to the United Nations.

Hayat Tahrir al-Sham (formerly Jabhat al-Nusra) and other less influential fighting factions currently control about half of Idlib and limited areas adjacent to the governorates of Hama, Aleppo, and Latakia. The region is home to three million people, about half of whom are internally displaced.

The area is subjected from time to time to raids launched by several parties, although the ceasefire is still holding to a large extent, despite the repeated violations by both sides of the conflict.

Since 2011, Syria has been witnessing a bloody conflict that has killed nearly half a million people, caused massive destruction to infrastructure and productive sectors, and led to the displacement of millions of people inside and outside the country.