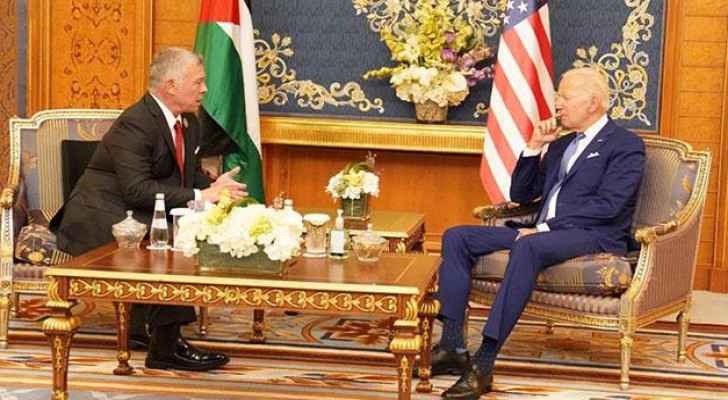 The below is the full text of the statement:

President Joseph R. Biden, Jr. and His Majesty King Abdullah II met today in Jeddah and reaffirmed the enduring strength of the strategic friendship between the United States and Jordan. The meeting took place during the Summit of the leaders of the United States, the Gulf Cooperation Council members, Egypt, Iraq, and Jordan.

The two leaders discussed efforts to further advance the close and historic partnership between the United States and Jordan, and coordination in addressing regional and international challenges. They noted the political and economic value of regional integration, for which Jordan can serve as an important hub for cooperation and investment in infrastructure, energy, water, food security and climate. The President noted the importance of the trilateral cooperation mechanism with Egypt and Iraq as an example of positive regional collaboration.

President Biden announced the intention of the United States to enter into a new memorandum of understanding (MOU) for assistance for Jordan, in which the United States plans to make a commitment to support the provision of no less than $1.45 billion per year in U.S. bilateral foreign assistance to Jordan, beginning in FY 2023 and ending in FY 2029. One of the most significant bilateral instruments of its kind, the MOU represents a major U.S. political commitment to Jordan’s stability and the durability of the partnership. The MOU is designed to address Jordan’s extraordinary needs, supports King Abdullah II’s economic reform program, and ensure the long-term strength of the close partnership between the United States and Jordan.  King Abdullah II thanked the President for the United States’ friendship and continued support for Jordan. He stressed the importance of this support to the Kingdom’s economic reform plans, its efforts to realize more sustainable economic growth, and to mitigate the impact of regional crises.

President Biden reaffirmed the United States’ unwavering support to Jordan as a key ally and a force for peace in the region, and for King Abdullah II’s leadership.

President Biden and King Abdullah II highlighted the strong defense partnership between the two countries, and reiterated commitment to their partnership in the fight against terrorism, including through cooperation within the Global Coalition to Defeat ISIS and the Aqaba Process.

The two leaders reaffirmed their commitment to continue working for a just, lasting and comprehensive peace between Israel and the Palestinians on the basis of the two-state solution. They stressed the importance of fostering political and economic horizons through confidence-building measures that would set the ground for meaningful Palestinians-Israeli negotiations. The also emphasized the importance of including the Palestinians in regional cooperation projects. The two leaders stressed the necessity of upholding the historic status quo in Jerusalem’s holy sites, and the President underlined the key role of the Hashemite Custodianship in that regard. King Abdullah II also expressed appreciation for U.S. support to the United Nations Relief and Works Agency for Palestine Refugees in the Near East (UNRWA).

Recalling United Nations General Assembly resolutions ES-11/1 and ES-11/2, on March 2 and March 24, respectively, demanding the Russian Federation to immediately, completely and unconditionally withdraw all of its military forces from the territory of Ukraine within its internationally recognized borders, the two leaders reaffirmed their commitment to the sovereignty, independence, territorial integrity and unity of Ukraine. They condemned violations of international humanitarian law and violations of human rights in areas of conflict, calling for abiding by international humanitarian law. The leaders also confirmed their intention to increase cooperation to counter the impact of the conflict in Ukraine on global food and energy security.

President Biden and King Abdullah II stressed the need to find a political solution to the Syrian crisis, consistent with United Nations Security Council Resolution 2254 (2015). President Biden expressed appreciation for Jordan’s hosting of Syrian refugees. His Majesty thanked the President for continued U.S. support to help Jordan in its efforts to meet the needs of refugees. The two leaders urged sufficient international support to refugees and host countries.

The two leaders emphasized commitment to the stability and security of Iraq, and the need to protect the significant progress the country has made towards peace and stability.  The two leaders intend to remain in close consultation and further develop the deep friendship between the United States and Jordan.