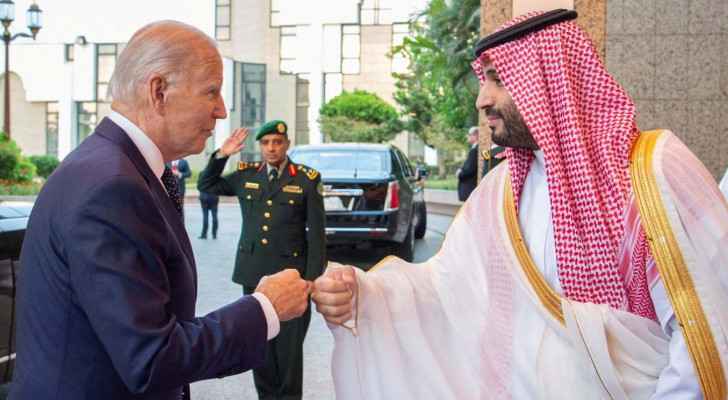 US President Joe Biden left Saudi Arabia on Saturday, after a visit that sparked controversy in the United States.

Biden had previously vowed to make Saudi Arabia a pariah state over its human rights record, particularly due  to the murder of Saudi journalist Jamal Khashoggi in 2018.

Biden concluded in Jeddah his first Middle East tour as president of the United States, which also included the Israeli occupation and the Palestinian territories, during which he sought to present a new vision for the American role in the region.

Biden announced, during his meeting with His Majesty King Abdullah II Saturday in Jeddah, the United States' intention to sign a new memorandum of understanding with Jordan, through which it will provide annual assistance to Jordan of no less than 1.45 billion dollars during the period between 2023 and 2029.

A joint statement after the two leaders met on the sidelines of the Jeddah summit indicated that the memorandum reflects the political commitment of the United States to support Jordan, its stability and the strength of the partnership between the two countries, and aims to meet Jordan's needs and support the economic reform program announced by His Majesty King Abdullah II.

President Biden reaffirmed the United States' absolute support for Jordan as a major ally of the United States and a force for peace in the region, and for the leadership of His Majesty King Abdullah II.

During their meeting, which was attended by HRH Prince Al Hussein bin Abdullah II, the Crown Prince, the two leaders reaffirmed their commitment to continue working to achieve a just, lasting and comprehensive peace between the Israeli Occupation and the Palestinians on the basis of the two-state solution, and stressed the need to preserve the historical status quo in the holy sites in Jerusalem.

President Biden stressed the important role of the Hashemite guardianship in this, while His Majesty King Abdullah II valued the support provided by the United States to the United Nations Relief and Works Agency for Palestine Refugees (UNRWA).