Both peoples have deep, ancient roots in this land: Biden says about two-state solution

Both peoples have deep, ancient roots in this land: Biden says about two-state solution 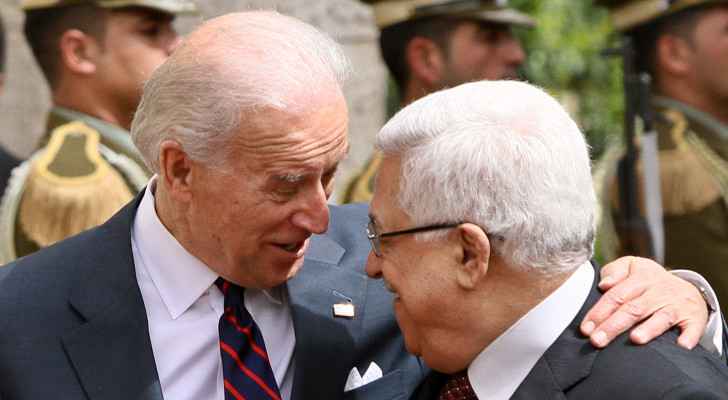 Palestinian President Mahmoud Abbas and his American counterpart Joe Biden held a press conference on Friday, after their meeting in which they discussed the latest political developments and bilateral relations.

Abbas said “We look forward to US efforts to stop settlements and settler violence,” adding “the opportunity for a two-state solution may only be available today, and we do not know what will happen in the future.”

“We seek to achieve a comprehensive and just peace based on international legitimacy and the Arab Peace Initiative,” Abbas said.

“The Palestinian people deserve a state of their own that’s independent, sovereign, viable and contiguous. Two states for two peoples, both of whom have deep and ancient roots in this land,” Biden stressed.

Biden said that the “Palestinian people are hurting now. You can just feel it.”

“The United States in my administration will not give up on trying to bring the Palestinians and Israelis and both sides closer together,” he said.

Biden also called the death of Shireen Abu Akleh “an enormous loss” and said that the United States “will continue to assist on a full and transparent accounting of her death and will continue to stand up for media freedom everywhere in the world.”

Biden also mentioned the deep connections Islam, Christianity and Judiasm have with Palestinian land and Jerusalem in particular saying that Jerusalem “must be a city for all its people. Its holy sites preserving the status quo with the Hashemite Kingdom of Jordan continuing to serve as custodian.”