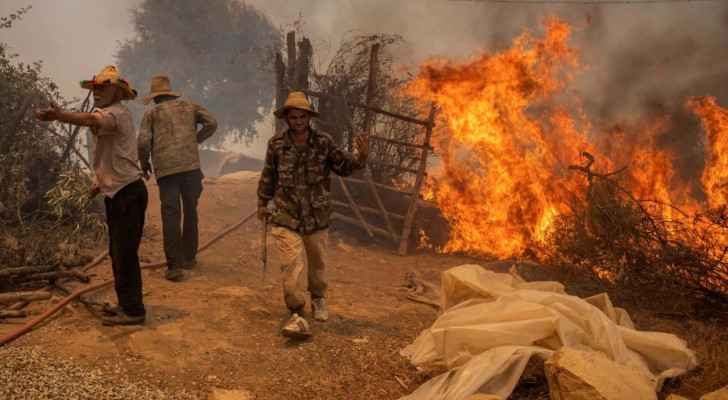 Hundreds of Moroccan firefighters and soldiers battled late Thursday to put out at least four infernos ripping through forests in the north of the kingdom, officials said.

The fires, fanned by strong winds in the four areas, have not resulted in any casualties so far, but nearly 500 families were evacuated "as a precaution" in the provinces of Larache and Taza, according to official statements.

Shocked by how fast the flames were spreading, residents fled their homes, with some families herding their cattle and horses -- upon which their livelihoods depend -- ahead of them.

"I was with my family, and at one point, we heard people shouting, 'Fire! Fire!'" said Samir Boundad, from Larache.

"We ran out to flee and fortunately, thanks to God, the fire moved up the mountain."

A village in the Ksar El Kebir region was destroyed by the flames.

Hundreds of civil defense workers, as well as soldiers and police officers, are trying to stop the fires from causing more destruction.

In four provinces -- Larache, Ouezzane, Tetouan and Taza -- the fires ripped through forestland that is difficult to access, said Fouad Assali, head of the National Center for Forest Climate Risk Management.

"Efforts are continuing in the hope of bringing these fires under control," Assali was quoted as saying by the official MAP news agency.

Since Wednesday night, at least 1,000 hectares (2,500 acres) of forest have burned in Larache and Ouezzane, according to initial reports, leaving burnt trees smoldering under a sky blanketed by plumes of smoke.

One deceased in massive fire in Moscow shopping center

One deceased in massive fire in Moscow ....