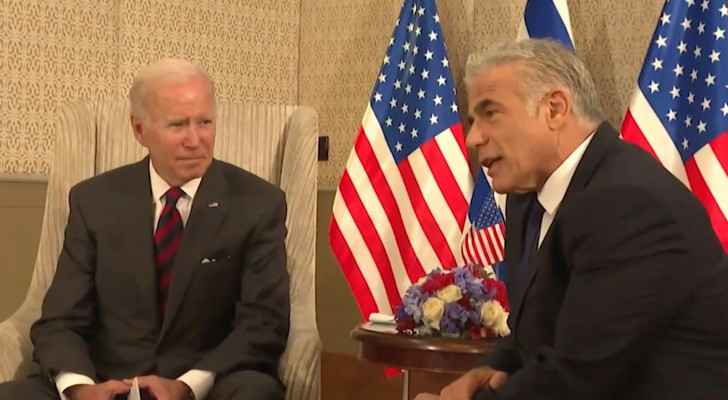 "This declaration is pretty significant and it includes a commitment to never allow Iran to acquire a nuclear weapon and to address Iran's destabilizing activities, particularly threats to Israel," said a Biden administration official, who requested anonymity.

Biden touched down at Ben Gurion Airport near Tel Aviv on Wednesday for the first Middle East tour of his presidency, which will see him meet Israeli Occupation and Palestinian leaders before flying to Saudi Arabia.

Lapid, Israeli Occupation's caretaker leader ahead of an election in November, had previously said Iran would top the agenda in his talks with the US president.

The declaration they signed would reaffirm "unbreakable bonds between our countries and expand on the long standing security relationship between the United States and Israel", said the US official.

An Israeli Occupation official, also speaking on condition of anonymity, said the document was "going to be a living testimony to the unique quality, health, scope, depth and intimacy of the US-Israel relationship."

The Israeli Occupation is staunchly opposed to a nuclear deal Iran signed with world powers in 2015 and which Biden is trying to get back on track after his predecessor Donald Trump withdrew US support.

Biden said pulling out of the landmark accord was a "gigantic mistake".

Iran is "closer to a nuclear weapon now than they were before", the US president said in an interview aired Wednesday by Israel's Channel 12.

Asked whether the United States would use force to prevent Iran from acquiring nuclear weapons, Biden said: "If that was the last resort, yes."

‘I sympathize with the Israeli people’: Ukraine's ....