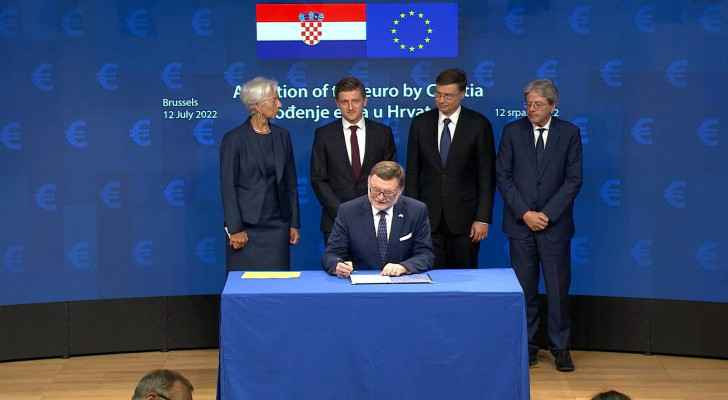 "I would like to congratulate my counterpart, Zdravko Maric, and the whole of Croatia for becoming the 20th country to join the euro area," said Zbynek Stanjura, the finance minister of the Czech Republic, which holds the EU's rotating presidency.

Croatia's switch from the kuna to the euro in 2023 will come less than a decade after the former Yugoslav republic joined the European Union and will set a new milestone in the bloc's further integration.

"This is a time for celebration... and an act of conviction," said Christine Lagarde, the head of the European Central Bank at a signing ceremony in Brussels.

"The whole of Croatia decided and was convinced of the value of joining the euro and the euro area," she added.

In adopting the legal texts necessary for the historic move, the ministers officially set the euro at 7.53450 Croatian kuna.

The newest member joins the group at a difficult moment with the euro hovering close to parity with the US dollar, a symptom of a looming cost-of-living crisis in the eurozone economy.

"We're all facing very strong challenges these days, but obviously with coordinated policies and measures I think we can cope with these challenges,” said Maric as he arrived to meet his counterparts in Brussels.

To join the euro, Croatia met the strict conditions, including keeping inflation in the same range as its EU peers, as well as embracing sound public spending.

Croatia expressed willingness to adopt the single currency upon joining the EU in 2013, and the decision to allow Zagreb's entry comes as the euro has just celebrated its 20th anniversary.

On January 1, 2002, millions of Europeans in 12 countries gave up the lira, franc, deutsche mark and drachma for euro bills and coins.

Croatia coach Dalic 'proud' to have ....