European Union warns of largest expulsion of Palestinians 'in decades'

European Union warns of largest expulsion of Palestinians 'in decades' 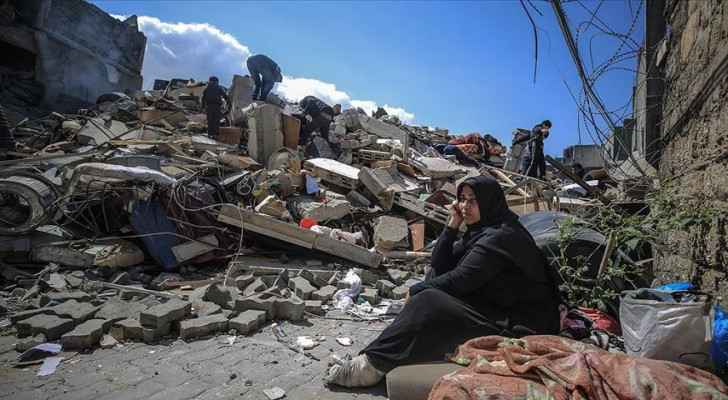 A European Union envoy warned Thursday of the possibility of a mass expulsion of Palestinians from an area of the occupied West Bank that is at the center of a long-running legal battle in the wake of an Israeli Occupation court ruling.

The warning came from the European Union Ambassador to the Palestinian Territories, Sven Kon von Burgsdorff, during a tour of the Masafer Yatta area in the occupied West Bank, where the frequency of forcing Palestinians to evacuate their homes increased after losing a case related to their right to land, in the Israeli Occupation Supreme Court on May 4.

The Israeli Occupation Supreme Court ruled that more than 1,000 people living in the villages of the Masafer Yatta area, "failed to prove" their claim that they were permanent residents there, before the army declared it a prohibited military zone called "Shooting Field 918."

The judicial decision put an end to two decades of legal dispute, paving the way for the expulsion of Palestinians from their homes.

Von Burgsdorff told AFP that demolitions had risen dramatically since the ruling.

Twenty-seven structures have been demolished since the ruling, and 30 more demolitions have been ordered, twice the average in past years, according to an EU source.

In the early eighties, the Israeli Occupation army, which has occupied the West Bank since 1967, announced the transformation of about 30,000 dunams of the total area of Masafer Yatta (3,000 hectares), which includes 12 villages, into a military training area, and said that the area is not permanently inhabited.

"Families have lost their homes, but this decision is a political decision and it is not legal at all," he told AFP.

"International pressure is the only way to stop this," he added.

The diplomatic visit was postponed for two days after the Israeli Occupation army decided to conduct live ammunition exercises in the area.