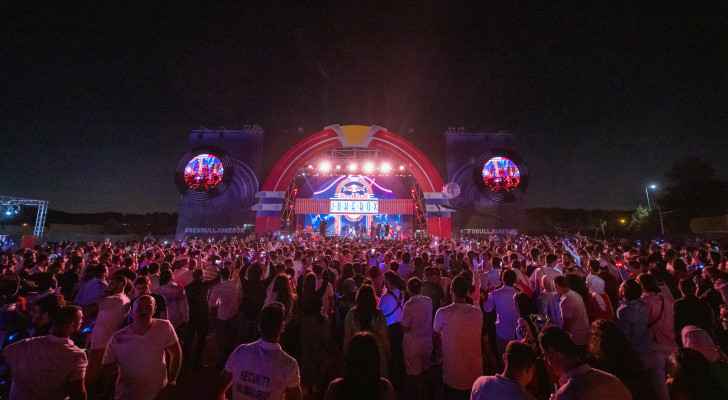 A multitude of Jordanian stars took the stage at the Middle East’s first ever customized concert, Red Bull Jukebox, which took place at Dunes Club in Amman on the 1st of July. The 6-hour event included a lot of entertainment from DJ Flash, DJ Ayy Tee, and headliners A5rass and Aziz Maraka, who performed an hour-long concert each.

The first artist to take the stage was A5rass, who lit up the crowd with a diverse performance of songs, genres, and styles of his famous catalog, all in accordance with what audiences voted for online prior to the concert, in addition to extra songs selected by the crowd using their specialized voting bracelets.

A5rass decided to have the crowd choose between song Lahali and song Estanna Shway, and the majority of the 3,500 attendees lit up their bracelets in the color blue, signaling their choice of song Lahali.

After A5rass’ exceptional performance, Aziz Maraka stepped up to sing some of his most famous songs, including Ya Bay and Mafi Mennek. He brought the heat and ignited the stage with nothing but joy and crowd cheers.

Red Bull Jukebox serves as a unique concert setup where the fans get to customize the concert itself by choosing which songs will play during the show and how, a novel concept in the Middle East. The event was held on the 1st of July at Dunes Club and sponsored by Zain Telecom, INGOT Brokers, Royal Jordanian, Jordan Ahli Bank, MG Motor Jordan, Ro’ya TV, Bliss 104.3, and Radio Hala.

For its debut, Red Bull Jukebox brought headliners Aziz Maraka and A5rass, scoring an attendance of more than 3,500 music lovers.

About Red Bull Jukebox:
Red Bull Jukebox is an extraordinary concert with a setlist chosen by the fans! They get to decide how they want to experience the songs played up on stage. In an online, on-site voting system, fans customize their concert experience from A to Z.