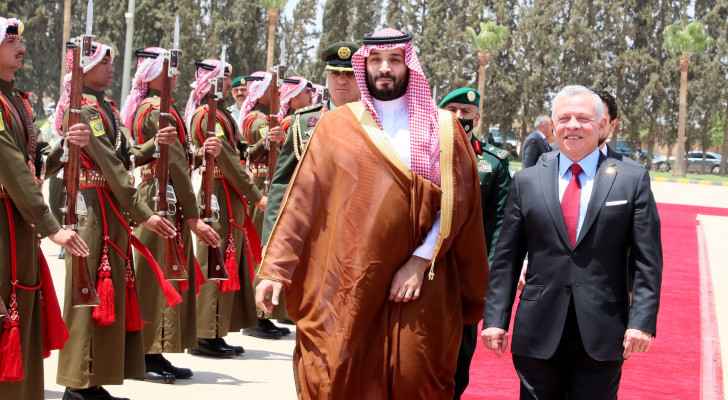 A joint communiqué was released at the conclusion of the official visit of Crown Prince Mohammed bin Salman bin Abdulaziz Al Saud, the deputy prime minister and minister of defence of Saudi Arabia, to Jordan on Wednesday.

The communiqué reiterated the importance of joint action to enhance cooperation in economic and investment-related fields, as well as the need to follow up on the outcomes of the 17th meetings of the Jordanian-Saudi Joint Committee, and the resulting agreements.

Jordan expressed appreciation of Saudi support for development projects in various fields, while Saudi Arabia commended Jordan’s launch of the Economic Modernisation Vision for the upcoming 10 years, the communiqué said

The two countries noted the need to find suitable means to address the fluctuation in the prices of oil, energy, and food, according to the communiqué.

The two sides, in the joint statement, reaffirmed the importance of maintaining cooperation in electric connectivity projects between the two countries, and bolstering cooperation in the field of energy efficiency.

Saudi Arabia expressed appreciation of Jordan’s support for Riyadh’s candidacy to host World Expo 2030, according to the statement.

Jordan and Saudi Arabia reiterated the need for launching serious and effective international efforts to create a political horizon to resolve the Palestinian issue, on the basis of the two-state solution.

The statement reaffirmed the need to cease all illegal Israeli Occupation measures that undermine the two-state solution and the opportunity to reach peace.

In addition, the two countries stressed the need for Israeli Occupation to respect the historical and legal status-quo in Jerusalem, and its Islamic and Christian holy sites, as well as the role of the Jerusalem Awqaf Council, affiliated with Jordanian Ministry of Awqaf and Islamic Affairs, as the sole entity responsible for the administration of Al Aqsa Mosque/Al Haram Al Sharif.

Saudi Arabia highlighted the importance of the historical Hashemite Custodianship of Islamic and Christian holy sites in Jerusalem, and its role in safeguarding holy sites, as well as the city’s Arab, Islamic, and Christian identity.

The two sides reaffirmed that the security of Jordan and Saudi Arabia is one and the same.

Jordan stressed it firmly stands with Saudi Arabia in all its measures to safeguard its security, stability, and interests.

The two sides called for stepping up efforts to find a political solution to the Syrian crisis, and to stop interventions that threaten Syria’s unity and sovereignty.

Jordan and Saudi Arabia expressed hopes that the parties in Iraq would reach an agreement to form a government, while stressing the need to maintain security and stability in Lebanon, as well as support the Lebanese people.

The statement said the two countries support international efforts that seek to prevent Iran from acquiring nuclear weapons, stressing the need to step up effort in the fight against terrorism, in all its forms.