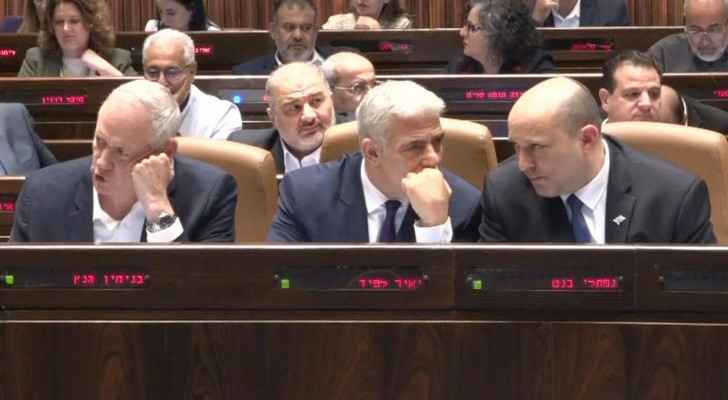 Israeli Occupation lawmakers were holding a first vote Wednesday on a government bill to dissolve parliament and call an early election, after Prime Minister Naftali Bennett said his eight-party coalition was no longer tenable, according to AFP.

The government has said it wants to fast-track the bill but the opposition led by ex-premier Benjamin Netanyahu will attempt to block its passage in a bid to form a replacement government without the need for what would be the fifth election in less than four years.

If the government's dissolution bill passes Wednesday's preliminary vote, it must then clear a separate committee vote and three further votes in the full parliament.

If it passes all those hurdles, the election is expected to be called for October 25, Hebrew media reported.

Foreign Minister Yair Lapid would take charge as prime minister of a caretaker government, in accordance with a power-sharing deal he reached with Bennett after 2021 elections, when the pair forged an alliance of ideological rivals united in their desire to oust Netanyahu.

Netanyahu has cheered the coalition's collapse and vowed to form a new right-wing government, with or without fresh elections.

His Likud party has been courting potential defectors from coalition ranks to give him the parliamentary majority he needs for a snap return to power.

Those being wooed include religious nationalists from within Bennett's own Yamina party and hawks from Justice Minister Gideon Saar's New Hope party.

"Until the dissolution law is finalized there's still the option of an alternate government, a government headed by Netanyahu," Likud lawmaker Miri Regev told army radio.