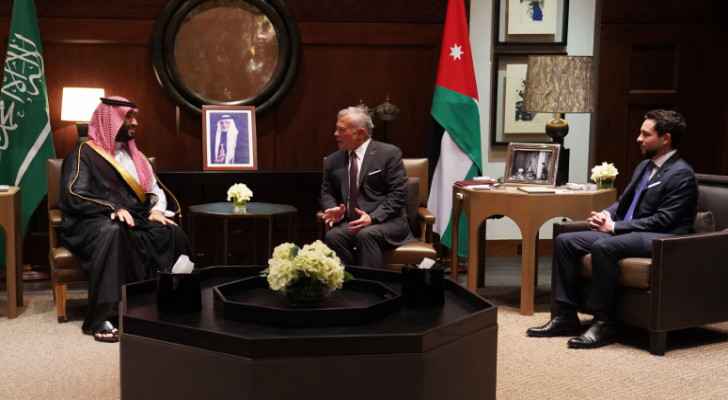 The Saudi crown prince conveyed the greetings of Custodian of the Two Holy Mosques King Salman bin Abdulaziz Al Saud to King Abdullah, who, in turn, asked the crown prince to convey his greetings to the Saudi monarch.

At bilateral talks followed by expanded ones, attended by senior officials and officers on both sides, His Majesty and Crown Prince Mohammed expressed pride in the deep-rooted ties between the two countries and peoples, reaffirming keenness to expand them further.

The talks covered means to bolster economic cooperation and the sectors that the Saudi Jordanian Investment Fund can invest in.

The King noted the pivotal role of Saudi Arabia, led by King Salman, in supporting Arab and Muslim causes, bolstering joint Arab action, and working towards regional and global peace.

His Majesty reaffirmed Jordan’s full support for Saudi Arabia in countering any attacks, reiterating that Jordanian and Saudi security are one and the same.

The talks covered the latest regional and international developments, foremost of which is the Palestinian cause, and the importance of supporting the Palestinians in fulfilling their just and legitimate rights, as well as efforts to reach political solutions to regional crises.

For his part, the Saudi crown prince expressed appreciation of the warm welcome, stressing Saudi Arabia’s keenness to bolster ties with Jordan and maintain coordination on issues of mutual concern, in service of joint interests and regional causes.

Crown Prince Mohammed stressed the historic ties between the two countries, adding that cooperation continues across all sectors, with the goal of pushing towards a new phase of partnership.

The Saudi crown prince noted the major opportunities in Jordan, stressing his country’s keenness to invest in them, which would benefit the two countries.

At the conclusion of the talks, His Majesty bestowed Al Hussein bin Ali Medal, the highest civilian medal in Jordan awarded to heads of state and royalty, to highlight the deep-rooted ties between the two countries.

The King hosted a dinner in honor of the Saudi crown prince and the delegation, attended by senior officials.