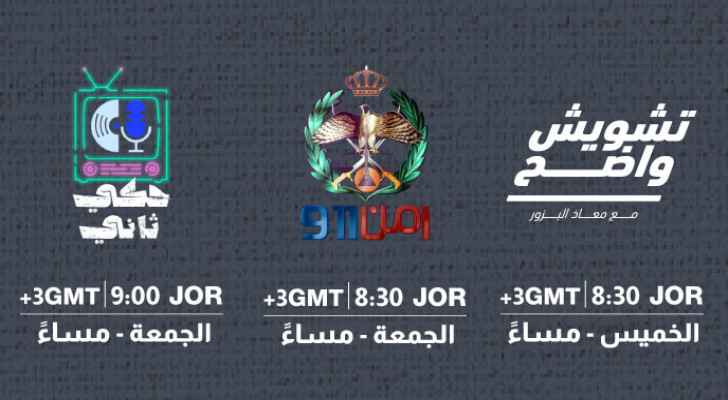 Roya TV introduces its programs which will be aired on the weekends of June 2022. The shows include both brand new ones as well as new scenes for older ones.

The show takes us on a trip along with the brave men and women of the PSD as we learn more about their training and the activities they do, to serve Jordan and its citizens.

New episodes will be aired every Friday at 8:30 pm.

‘Haki Tani’ show, which starts on Friday, June 17, at 9:00 pm, is a talk show directed at the youth and presented by Ahmed Yassin, Maan Safi, Ghalia Twal and Alia Fares.

The program discusses many societal issues that the presenters provide their personal insight on.

New episodes will be aired every Friday at 9:00 pm.

‘Tashweesh Wadeh’, which starts on Thursday, June 16, at 8:30 pm, is presented by Muath Al-Bzour, and its comedy acquired a large audience in the country. It is one of the few satirical political comedy programs in Jordan.

The show deals with societal, political and economic issues and is presented in a sarcastic comedic manner.

To watch the program episodes as soon as they are released, visit the Roya website, or download the Roya application on: App Store, Huawei AppGallery, Google play.

‘The Show’ collaborates with Orange Jordan on ‘The Studio’ ....

‘The Show’ collaborates with Orange ....