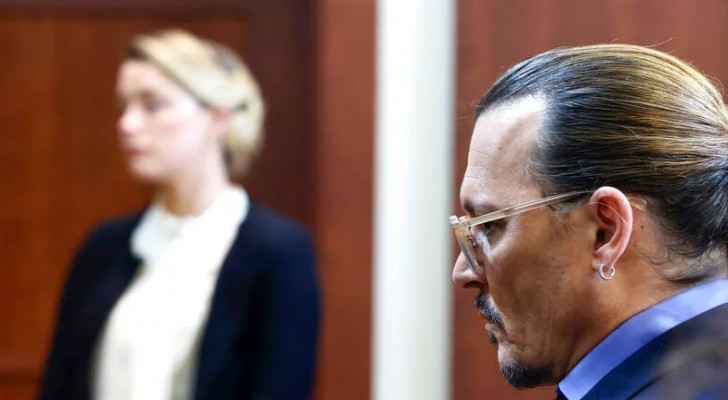 A jury began deliberations on Friday in the blockbuster defamation case between Johnny Depp and his ex-wife Amber Heard after a six-week trial featuring blistering mutual accusations of domestic abuse.

The seven-person jury met for about two hours after lawyers delivered closing arguments in the case heard in Fairfax, Virginia, near the US capital.

The jury, which is considering both Depp's defamation claim against Heard and her counterclaim against him, will resume deliberations on Tuesday after the holiday weekend.

Elaine Bredehoft, an attorney for Heard, said the defamation suit filed against the "Aquaman" star by Depp and a campaign of "global humiliation" has made her life "pure hell."

"It has destroyed her life. This has consumed her. She's getting death threats," Bredehoft told the jury.

Benjamin Chew, one of Depp's lawyers, countered that while the 58-year-old "Pirates of the Caribbean" star may not be a "saint" and has struggled with drugs and alcohol, "he is not a violent abuser."

"He did not and does not deserve to have his life, his legacy destroyed by a vicious lie," Chew said. "Miss Heard's attempt to paint herself as a heroic survivor, an innocent survivor, and Mr Depp as a terrifying abuser, are utterly false.

"We ask you, we implore you, to give him his name, his reputation and his career back," he told the jury.

Bredehoft said any damage to Depp's career was self-inflicted.
"Hold this man responsible," she told the jury. "He has never accepted responsibility for anything in his life.

"He's blamed everybody in the world -- his agent, his manager, his lawyer, Amber, his friends, everybody."

Depp's lawyer Chew meanwhile referenced the #Metoo movement but said "it's for true survivors of abuse, not Miss Heard."

"Nobody has come out of the woodwork to say 'me too.' This is the unique and singular 'me too' case where there's not a single 'me too.'"

Camille Vasquez, another of Depp's attorneys, told the jury the evidence has "shown that Miss Heard is the abuser."

"She was violent, she was abusive and she was cruel," Vasquez said.

Depp filed suit against Heard over an op-ed she wrote for The Washington Post in December 2018 in which she described herself as a "public figure representing domestic abuse."

The Texas-born Heard did not name Depp in the piece, but he sued her for implying he was a domestic abuser and is seeking $50 million in damages.

The 36-year-old Heard countersued for $100 million, claiming that she suffered "rampant physical violence and abuse" at his hands.

Dozens of witnesses testified during the trial, including bodyguards, Hollywood executives, agents, entertainment industry experts, doctors, friends and relatives.
Depp and Heard each spent days on the witness stand during the televised trial, attended by hundreds of fans of the "Pirates" star and accompanied by a #JusticeForJohnnyDepp campaign on social media.

Video and audio recordings of heated, profanity-laced arguments between the couple were played for the jury, which also showed photographs of injuries allegedly suffered by Heard during their volatile relationship.

Hours of testimony was devoted to a finger injury that Depp suffered while filming an installment of "Pirates" in Australia in March 2015.

Depp claimed the tip of a finger was severed when Heard threw a vodka bottle at him. Heard said she did not know how the injury occurred.

Both agreed that Depp went on to scrawl messages on walls, lampshades and mirrors using the bloody digit.

Heard said Depp would become a physically and sexually abusive "monster" during alcohol- and drug-fueled binges and resisted her repeated efforts to curb his drinking and drug use.

Depp testified that it was Heard who was frequently violent and said it has been "brutal" to listen to "outlandish" accusations of domestic abuse made against him.

"No human being is perfect, certainly not, none of us, but I have never in my life committed sexual battery, physical abuse," he said.

Heard, who was married to Depp from 2015 to 2017, obtained a restraining order against him in May 2016, citing domestic violence.

Depp, a three-time Oscar nominee, filed a libel suit in London against the British tabloid The Sun for calling him a "wife-beater." He lost that case in November 2020.

Both sides have claimed damage to their Hollywood careers.

An industry expert hired by Depp's side said the actor has lost millions because of the abuse accusations, including a potential $22.5 million payday for a sixth installment of "Pirates."