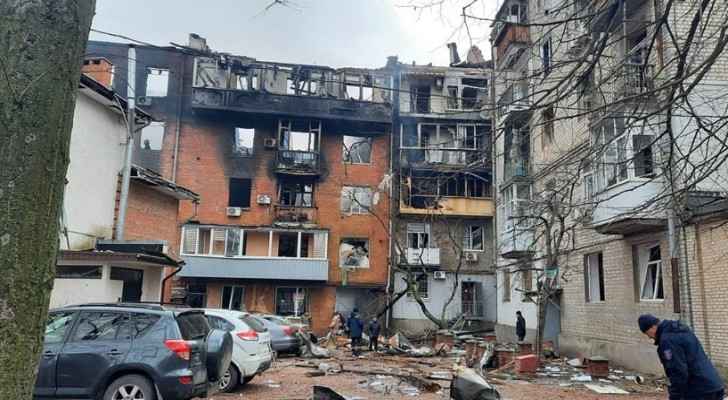 Here are the latest developments in the war in Ukraine as of May 20, according to AFP.

- Russia homes in on Lugansk -

"The liberation of the Lugansk People's Republic is nearing completion," Shoigu says.

After some 2,000 Ukrainian soldiers surrendered at the besieged Azovstal steel plant in the port city of Mariupol, now under Moscow's control, Kyiv orders its remaining troops holed up there to lay down their arms after nearly three months of desperate resistance.

"In Donbas, the occupiers are trying to increase pressure," he says.

In his nightly address, he adds: "There's hell, and that's not an exaggeration."

Shoigu also says Moscow will create new military bases in western Russia in response to the expansion of NATO.

"By the end of the year, 12 military units and divisions will be established in the Western Military District," Shoigu tells a meeting.

The lawyer for the first Russian soldier on trial in Kyiv says his client is "not guilty" of premeditated murder and war crimes, urging his acquittal, even though he has admitted to killing a civilian.

Sergeant Vadim Shishimarin, at the center of the first war crimes trial held over the conflict, has said he is "truly sorry" and asked the widow of the Ukrainian civilian he killed for forgiveness.

Ukrainian prosecutors have requested he be given a life sentence.

Germany's finance minister is ruling out any joint EU borrowing to help cover the massive cost of rebuilding war-scarred Ukraine, after the idea was floated by top European officials.

After chairing G7 talks in Germany that saw countries pledge nearly $20 billion (19 billion euros) in aid to Ukraine, Christian Lindner said there would be no repeat of the EU's landmark post-pandemic recovery fund, known as "Next Generation", that is being financed by common debt.

President Recep Tayyip Erdogan says he is talking to Western leaders about Turkey's objections to NATO membership for Sweden and Finland, whom he accuses of sheltering Kurdish separatists.

Russia's war in Ukraine has shifted political opinion in both Nordic countries in favor of joining the Western military alliance.

- Russia to cut gas to Finland -

Russian supply of natural gas to Finland is to be cut on Saturday morning, Finnish and Russian energy companies say, after the country refused to pay supplier Gazprom in rubles.

"We have been carefully preparing for this situation," Finland's Gasum CEO Mika Wiljanen says. "There will be no disruptions in the gas transmission network."

In a statement on social media, Zelensky says that Russian strikes had targeted "the newly-renovated House of Culture", in the town of Lozova, in the eastern region of Kharkiv.