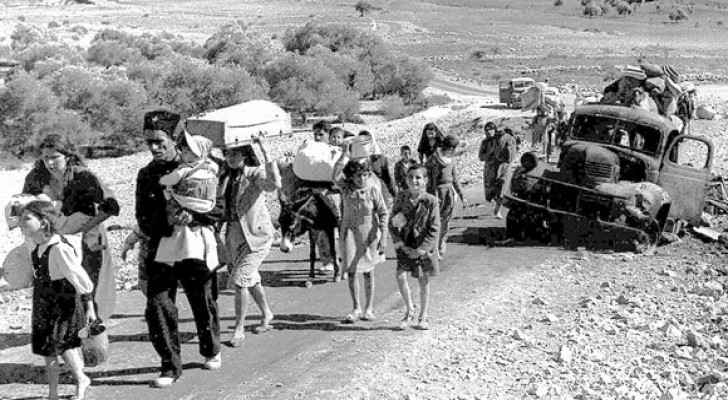 On May 15, 1948, Palestine was occupied and turned into a Jewish-majority state at the expense of two-thirds of the Palestinian population at the time who were forcibly expelled from their homeland.

The day is referred to as the Nakba – Arabic for ‘catastrophe’ – and it refers to the systematic ethnic cleansing of over 750,000 Palestinians by Zionist armed gangs who were previously trained by British troops to fight alongside them in World War II.

Palestine used to house people of all religions and faiths, but between 1947-1949 there was a near-total destruction of Palestinian community by Zionist paramilitaries.

The forces destroyed around 530 villages and cities and took over 78 percent of historic Palestine.

They also killed about 15,000 Palestinians in a series of mass atrocities, including over 70 massacres.

The year 2022 marks 74 years of Al-Nakba. It marks the 74th year of Palestinians experiencing dispossession.

The anniversary comes at a time when many are outraged by the murder of prominent journalist Shireen Abu Akleh, who was killed as she was covering an Israeli Occupation raid on Jenin refugee camp, which is internationally recognized as Palestinian territory.

Her funeral was the biggest the country had ever witnessed with hundreds of thousands participating in her funeral procession which was supposed to be a peaceful time for mourners to bid her farewell.

However, Israeli Occupation troops assaulted mourners some of whom had to be hospitalized, beat and arrested people for hanging up her pictures or holding up flags of Palestine, but the act that shocked people the most was when the troops attacked pallbearers and caused them to nearly drop her casket to the ground.

Videos documented the attacks and international figures called the footage “disturbing and unacceptable.”