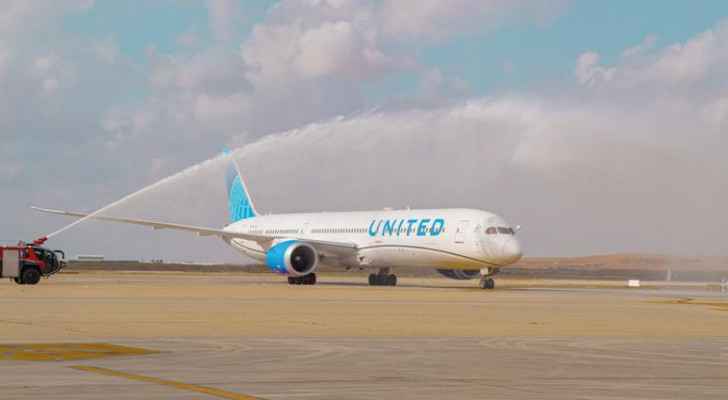 May 10, 2022 - Charge d’Affaires Mike Hankey, senior officials from United Airlines, and distinguished guests from Jordan’s transportation and tourism sectors celebrated on Tuesday the newest connection between Jordan and the United States, a 12-hour direct flight on United Airlines that will broaden and deepen the already strong relationship between the two countries. Charge Hankey noted both the direct benefits – increased tourism, economic activity, and business connections – and the knock-on effect for both countries’ economies in his welcoming remarks.

“The United States and Jordan enjoy a longstanding partnership, and this route – connecting our capitals – is an important symbol of our relationship,” Hankey said. “This new direct flight will strengthen our deep ties and contribute to shared economic opportunity.”

U.S. companies already invest more than $156 million annually in Jordan, and total trade between the countries tallies $4 billion each year. That will increase with another direct connection between the countries, Hankey said. As for tourism, which represents about 15% of Jordan’s economy, the new flights make it easier for more Americans to visit the archeological wonder of Petra, float in the healing waters of the Dead Sea, and experience the spectacular otherworldly landscape of Wadi Rum.

The new route builds on the free trade agreement (FTA) between Jordan and the United States, one of only 20 such agreements in the world enabling duty-free access to the U.S. market. The FTA is an enduring symbol of the close and continuing friendship between our countries, Hankey said.

Hankey noted how important the connection between the two capitals would be to position Jordan as a stronger regional gateway, building ties between other Middle Eastern countries and facilitating local commerce.

“We were excited to inaugurate our new service from Amman to Washington D.C. this week. Our partnership with the U.S. Embassy team here in Jordan has been invaluable in establishing this new route," said Patrick Quayle, United’s Senior Vice President International Network and Alliances. "As the only U.S. airline flying from Jordan direct to the United States, our new service strengthens our international route network and provides our customers from Jordan with convenient one-stop connections via our Washington Dulles hub to destinations across the Americas.”
For his part, the Secretary-General of the Ministry of Tourism and Antiquities, Dr. Emad Hijazeen, stressed the importance of this partnership, which contributes to strengthening the tourism, economic, and social relations between the two countries, and the cultural and humanitarian rapprochement between the people, as well as its contribution to increasing the number of American visitors to Jordan and facilitating the movement of travelers. Dr. Hijazeen drew attention to the diverse and unique Jordanian tourism sites that are rich in culture and history, noting that there are 6 sites on the UNESCO World Heritage List, including; Petra, the Baptism Site, Qasr Umrah, Umm al-Rasas, Wadi Rum, and finally Salt, "the city of tolerance and urban hospitality.”

Hankey, United Senior Vice President of International Network and Alliances Patrick Quayle, and Secretary General of Ministry of Tourism Dr. Emad Hijazine cut a celebratory cake to mark the occasion. Flights are scheduled three times weekly and can be booked on United.com and other flight booking websites.