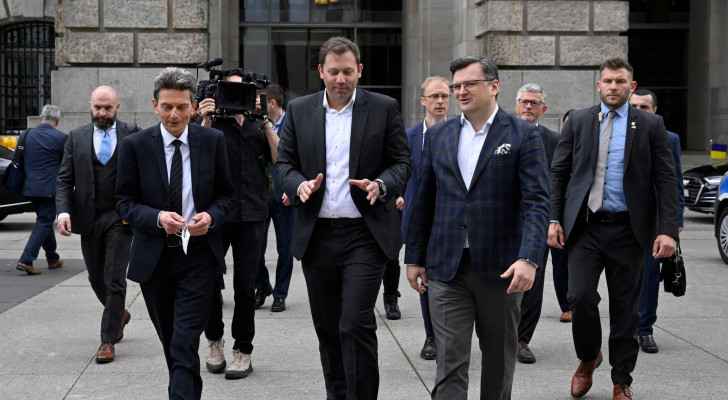 Ukraine wants a spot reserved in the European Union, even if obtaining full membership could take time, Foreign Minister Dmytro Kuleba said Thursday in Berlin, according to AFP.

"It is not about the fastest possible membership for Ukraine in the EU. But what is very important for us is for this spot to be reserved for Ukraine," he told German broadcaster ARD.

"We hear often that Ukraine belongs in Europe, belongs in the European family, and now it's about reserving this place," he added.

French President Emmanuel Macron warned early this week that it would take "decades" for a candidate like Ukraine to join the EU.

Macron suggested instead that a broader European political community could be created to include members like Ukraine or post-Brexit Britain.

Kuleba said he did not have sufficient details to weigh up Macron's suggestion for a wider European club.

But he said that "as far as we understand, the French proposal doesn't contradict granting Ukraine EU candidacy status".

The contrary would go against public statements made by EU leaders on how Ukraine is part of the European family, he warned.

"I can tell you right away that no alternative to European integration of Ukraine will be acceptable," Kuleba added, speaking to journalists after he met leaders of German Chancellor Olaf Scholz's Social Democrats.

Kuleba, who is in Berlin to meet political leaders of Europe's biggest economy before heading to Weissenhaus to attend talks with counterparts from the G7 most industrialized nations, also took pains to smooth over any remaining tensions with German leaders.

He noted that Germany was now stepping up in the response against Russia over the military operation on Ukraine.

"We see that Germany has currently taken the leading role," he said.

Kuleba said he will discuss further sanctions against Russia over its military operation on Ukraine.

Another key topic, the minister said, is the battle against global food shortages sparked by the war.