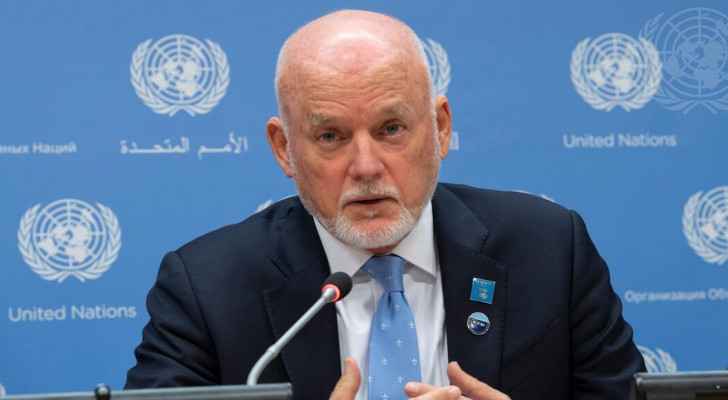 Ambassador Peter Thomson, UN Secretary-General’s Special Envoy for the Ocean, wrote an op-ed titled "2022: The Year to Stop the Decline of the Ocean’s Health."

Ahead of the UN Ocean Conference, which is expected to take place on 27 June to 1 July, Ambassador Thomson said:

With every breath we take, we are connected to the ocean. The ocean gives us oxygen, provides us with food and livelihoods. It stabilises our climate, absorbing most of the heat trapped in the Earth’s system. Billions of humans, animals and plants rely on a healthy ocean. But the ocean’s health is in trouble.

Rising carbon emissions are making the ocean more acidic, weakening its ability to sustain life underwater and on land. Plastic waste is choking the ocean. And if we continue on our current track, more than half of the world’s marine species may stand on the brink of extinction by 2100. Solutions exist to restore the health of the ocean, but they will require action from all parts of society, from world leaders down to every one of us.

There can be no healthy planet without a healthy ocean, and the ocean’s health is measurably in decline. Having said that, I wish to emphasize that 2022 can be the year we stop the decline.

To illustrate that assertion, 2022 is the International Year of Artisanal Fisheries and Aquaculture, and both aquaculture and artisanal fisheries are central to our quest for sustainability. Very importantly, last year also saw the launch of the UN Decade of Ocean Science for Sustainable Development and the UN Decade on Ecosystem Restoration to support and advance the realization of the UN’s 2030 Sustainable Development Agenda. In addition, we have the decision of the COP26 climate conference in Glasgow that ocean considerations must be built into UNFCCC’s ongoing work, giving cause for optimism that solid progress will be made on addressing such issues as ocean warming and acidification. These in turn will improve the ocean’s health and secure its unique capacity to sequester carbon.

But on top of these positive factors, and all the other positive ocean action meetings taking place this year, there are six international gatherings which taken together can really stop the decline. One of those meetings has already been held - the United Nations Environment Assembly (UNEA5) which in the first days of March in Nairobi consensually agreed to begin negotiations for a binding global treaty to end plastic pollution. We currently dump eleven million metric tons of plastic into the ocean each year and are projected to double that figure by 2030, tripling it by 2050. But we can stop that trend of outrageous pollution through the proposed treaty.

Secondly, the World Trade Organization Ministerial Conference takes place in mid-June in Geneva, where after two decades of negotiation, the WTO has the ability to ban harmful fisheries subsidies. 20 to 30 billion dollars of public funds go to such subsidies every year, mainly for the enjoyment of industrial fishing fleets, in an exercise described by many as the most harmful thing we do to ocean ecosystems. Do the right thing in Geneva, and the ocean’s health will be given a new lease on life.

Thirdly, this year’s resumption of the Intergovernmental Conference on Marine Biodiversity Beyond Areas of National Jurisdiction (BBNJ) presents the opportunity to conclude a robust and operable treaty for governance of the high seas, thereby safeguarding one of the planet’s most critical global commons. If only Member States can reach consensus, we will get the BBNJ job done in 2022.

Fourthly, the Convention on Biological Diversity’s COP15 to be held later this year in Kunming, holds the promise of the adoption of a new target to protect 30% of the planet by 2030. Such a decision at the COP this year would be a major game-changer for marine protected areas and thereby the ocean’s health.

Fifthly, we have the UN Ocean Conference, co-hosted by the governments of Kenya and Portugal, in Lisbon, 27 June to 1 July, where we will launch a great fleet of innovative, science-based solutions. These solutions will be carried forward in well-funded partnerships, representing effective implementation of Sustainable Development Goal 14 to conserve and sustainably use the ocean’s resources.

And lastly, at UNFCCC’s COP27, in Sharm-El-Sheik in November, we must all deliver on the ambition and political will for the climate adaptation and finance required to bend the curve in the direction of security, equity and sustainability.
If we are to halt the decline in the ocean’s health this year, we have to do the right thing at all six of these meetings, and while “we” primarily refers to Member States, it also refers to every one of us. We must not squander the unparalleled opportunities presented by 2022’s confluence of moments for decisive ocean action.

Let us all commit to redressing our relationship with Nature to one of respect and balance. Let us do this for our children and grandchildren, that they may live the good lives we wish for them.