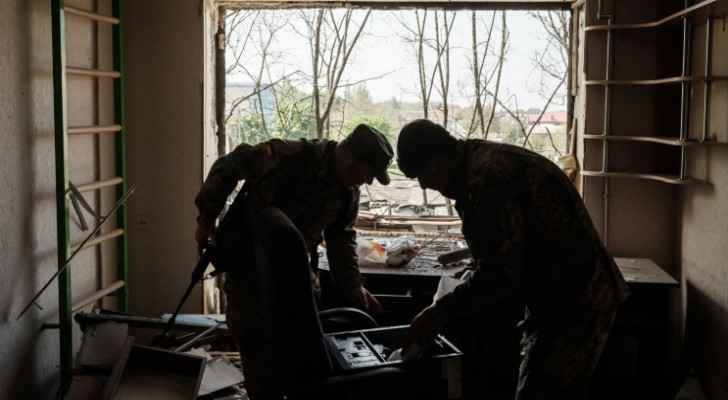 Ukraine's last soldiers in the port city of Mariupol face a brutal final showdown Sunday with besieging Russian forces, who are hoping to deliver a critical win ahead of the country's victory day, according to AFP.

President Volodymyr Zelensky is also set to hold talks with G7 leaders via video conference to discuss the situation in his country, which fears a renewed intensity to Moscow's offensive after the evacuation of civilians from Mariupol's Azovstal steel works.

The complex -- the final pocket of Ukrainian resistance in the devastated port city -- has taken on a symbolic value in the war, with the last soldiers holed up in its sprawling network of underground tunnels and bunkers.

Taking full control of Mariupol would allow Moscow to create a land bridge between the Crimean peninsula, which it annexed in 2014, and regions run by pro-Russian separatists in the east.

"The enemy is trying to finish off the defenders of Azovstal, they are trying to do it before May 9 to give (Russian President) Vladimir Putin a gift," Oleksiy Arestovych, an aide to Ukraine's president, said.

Ukraine's far-right Azov battalion, leading the defense at the steelworks, said one of its fighters had been killed and six wounded when Russian forces opened fire during an earlier attempt to evacuate people by car.

Zelensky said hundreds of people had been removed from the plant Saturday and that preparations for another stage of evacuation comprising the wounded and medics were under way.

Civilians who have escaped have described passing through Russian "filtration" sites where several evacuees told AFP they were questioned, strip-searched, fingerprinted, and had their phones and documents checked.

"They asked us if we wanted to go to Russia or to stay in (eastern Ukraine's self-proclaimed Donetsk People's Republic) or stay and rebuild the city of Mariupol," said Azovstal evacuee Natalia, who spoke on condition that her full name not be published.

"But how can I rebuild it? How can I return there if the city of Mariupol doesn't exist anymore?"

Earlier, Kyiv's defense ministry said Russian forces had resumed their assault on the site, despite talk of a truce to allow trapped civilians to flee.

Russia's forces may be seeking to hand Putin a win ahead of Monday's Victory Day, when the country celebrates its 1945 defeat of Nazi Germany.

At home, Russia will mark the holiday in grand style, with eight Mig-29 fighter jets set to fly over Moscow's Red Square forming the letter "Z" -- the mark of Russia's military assault in Ukraine.

Seventy-seven aircraft are set to conduct a fly-past, including the rarely seen Il-80 Doomsday plane -- built to withstand a nuclear attack.

But despite apocalyptic nuclear threats issued by Russian state media, the CIA said Saturday it saw no indication Moscow was preparing to use tactical atomic weapons in the Ukraine conflict.

"We don't see, as an intelligence community, practical evidence at this point of Russian planning for the deployment or even potential use of tactical nuclear weapons," CIA director Bill Burns said at a conference.

Burns also warned that Putin believed he could not afford defeat in Ukraine and that he might be "doubling down" on the offensive.

And international efforts to pressure the Russian leader continue, with G7 leaders, including US President Joe Biden and Ukraine's Zelensky, set to discuss Western support for Kyiv via videoconference on Sunday.

Further sanctions or at least a tightening of the huge array of economic punishments already inflicted on Russia are expected to be discussed.

Ambassadors from EU member states will also meet in Brussels on Sunday to discuss their sixth round of economic sanctions against Moscow, which this time should include a phased ban on imports of Russian oil.

Far from the diplomatic wrangling, fighting continues across war-torn Ukraine.

The Ukrainian rescue service said a missile had hit a technical college in Kostiantynivka, in the eastern region of Donetsk, killing at least two people.

Four civilians had been killed in Donetsk, two in Bakhmut and two in Kostiantynivka, with another nine people wounded, he added.

Zelensky on Saturday said a Russian missile has struck a museum in the Kharkiv region, announcing that the "Russian army destroyed or damaged nearly 200 cultural heritage sites already."

In Lugansk, Ukrainian officials said Friday that Russian forces had almost encircled Severodonetsk -- the easternmost city still held by Kyiv -- and were trying to storm it.

Kherson in the south remains the only significant city Russia has managed to capture since the war began.

Ukrainian forces have in response launched a counter-offensive.

Kyiv's defense ministry said it had destroyed another Russian vessel -- a Serna-class landing craft -- in the Black Sea.

"The traditional parade of the Russian Black Sea fleet on May 9 this year will be held near Snake Island -- at the bottom of the sea," the ministry added. Russia did not immediately confirm the incident.

According to the defense ministry, Russian troops were forced to demolish three road bridges near Tsyrkuny and Ruski Tyshky outside Kharkiv in a bid to slow the Ukrainian advance.

And as the war dragged towards its third month, British intelligence said Ukrainian forces equipped with high-end materiel by Western allies have been able to destroy some of Russia's most advanced weaponry.

"The conflict in Ukraine is taking a heavy toll on some of Russia's most capable units and most advanced capabilities," UK Defense Intelligence said.

"It will take considerable time and expense for Russia to reconstitute its armed forces following this conflict," it said, adding that sanctions on advanced components would make it harder for Russia to re-arm.