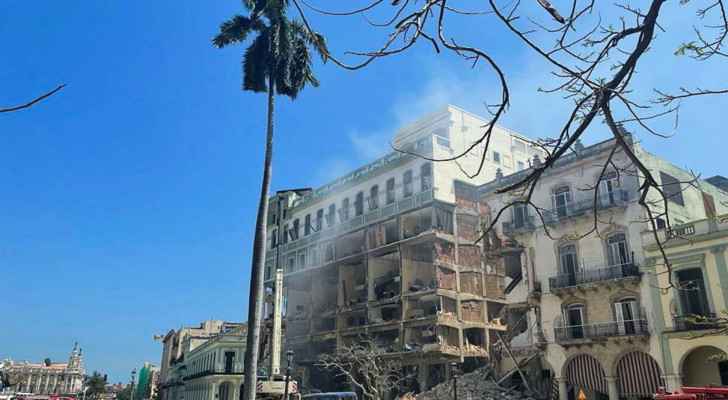 Cuban ambulance teams tried Saturday to find survivors in the rubble of the Saratoga hotel in central Havana, after a massive explosion destroyed part of it, leaving at least 26 people dead, according to a new toll.

"My daughter works in Saratoga, she's been here (under the rubble) since yesterday, eight in the morning, and since then I don't know anything about her," Yomara Kobas told reporters, explaining that she did not find her daughter, neither in the morgue nor in the hospital.

One of the firefighters at the scene said that searches on the upper floors of the building did not allow any bodies or survivors to be found. The AFP correspondent pointed out that the search operations are now concentrated in two underground floors, which are difficult to reach due to the large amount of rubble.

Also, rescue teams, using sniffer dogs and equipped with devices to monitor survivors, are trying to reach the basement where a woman made a distress call on Friday afternoon.

"We have to move forward, there may still be comrades downstairs alive, and the longer we delay, the less chance they have of surviving," said Ramiro Valdes, deputy prime minister and leader of the 1959 revolution.

A new official toll indicated that 26 people were killed, including four children, in the explosion, most likely caused by a gas leak. Of the 45 injured people still receiving treatment, nine are in critical condition and six are in serious condition.

The previous outcome had reported the deaths of 25 people, including a Spanish woman.

Spanish Prime Minister Pedro Sanchez wrote in a tweet, "A Spanish tourist died and another Spaniard was seriously injured in the explosion at the Saratoga Hotel. All our solidarity with the families, all the victims and the injured. All our support also for the Cuban people."

The hotel, located close to the Capitol, the seat of the National Assembly, is an old Havana landmark with its distinctive green facade. It is considered the Celebrity Hotel and has recently hosted Mick Jagger, Beyoncé and Madonna.

But on Saturday morning it appeared to be just a structure, and the explosion destroyed its first four layers.

Cuban President Miguel Diaz-Canel tweeted, "It is very unfortunate what happened, the devastation, especially the loss of life, as well as the wounded, but once again I want to note the speed of movement of the population and institutions."

"Solidarity prevailed," he added, at a time when many Cubans rushed Friday to donate blood to help the wounded.

The television reported that residents of nearby houses affected by the explosion were evacuated to shelters from Bab Al-Hita.

The Saratoga Hotel, which is undergoing renovations, has been closed to tourists for two years due to the COVID-19 pandemic.

The neoclassical building was built in 1880 primarily as a shopping center before being converted into a hotel in 1933, and in 2005 it was renovated into a five-star luxury hotel with 96 rooms, two restaurants and a rooftop pool.

Preliminary elements indicate that the explosion, which occurred on Friday around 11:00 (1500 GMT), was caused by a gas leakage during a supply operation by a tanker truck.

On Friday, the United States, Canada, the European Union and Venezuela, in particular, offered their condolences to the Cuban authorities.

"China is deeply saddened by the loss of life in (this) accident and expresses its sincere condolences to the families of the victims and injured," Chinese Foreign Ministry spokesman Zhao Lijian said Saturday.

Russian President Vladimir Putin also expressed his condolences to his Cuban counterpart, according to the Russian Foreign Ministry.