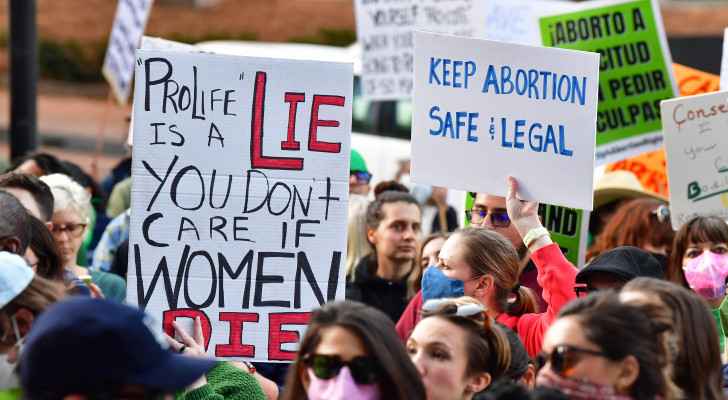 US President Joe Biden urged voters Tuesday to defend "fundamental" rights after a leaked Supreme Court draft ruling indicated the imminent end to nationwide legal abortion, long viewed as a basic freedom by tens of millions of Americans, according to AFP.

If the draft ruling is confirmed by the court, it would overturn the 1973 Roe v. Wade decision, which enshrined abortion rights across the country. Instantly, abortion laws would be left up to individual state legislatures, with as many as half expected to enact bans or new restrictions.

For many women, the potential loss of abortion rights across swaths of the United States raises the prospect of being forced to travel hundreds of miles for the procedure or giving birth in traumatic circumstances.

Outside the Supreme Court building in the heart of Washington, more than a thousand protesters on both sides of the hotly-debated issue gathered Tuesday.

"It's an obscene invasion of women's privacy and their abilities to decide what to do with their own bodies," Adriane Busby, a 40-year-old political analyst, told AFP.

"I didn't think that we would have to be here in 2022, debating, protesting this. It's a regression," the Washington resident said.

Republicans have pushed hard for years to overturn Roe, and it became only a matter of time after three conservative justices were appointed under former president Donald Trump, shifting the Supreme Court's political balance sharply to the right.

The leaked ruling's publication late Monday by the US news site Politico thrust the intensely divisive issue to the center of the November congressional midterms elections, potentially opening a path for beleaguered Democrats to stem expected losses.

Biden, whose Democrats have been forecast to lose their already narrow control of Congress, issued a rallying cry to the left, warning that restricting abortion rights will be only the beginning.

"I believe that a woman's right to choose is fundamental... and basic fairness and the stability of our law demand that it not be overturned," Biden said in a written statement.

"It will fall on voters to elect" officials who back abortion rights, he said, vowing to work to pass legislation in Congress that codifies Roe v. Wade -- a goal impossible to achieve unless far more Democrats win seats.

Speaking later to reporters, Biden went further, calling the draft ruling "radical" and warning of a "fundamental shift in American jurisprudence" that could put into question the future of gay marriage and "how you raise your child."

In New York, a liberal bastion, thousands of protesters rallied outside a federal courthouse in Manhattan chanting "Abortion is a human right, fight fight fight."

"You can only ban safe abortion. You cannot prevent women from taking their own reproductive choices out of their own hands. That's a fantasy," said Kaytlin Bailey, 35.

The leak of the draft ruling was unprecedented, knocking another hole in the once hallowed reputation of the top court as the one apolitical branch in the US government.

Chief Justice John Roberts confirmed that the document released by Politico was authentic, although he cautioned that this did not necessarily represent the court's final decision. Roberts ordered a probe into the leak.

Earlier Tuesday, crowds of protesters from both camps descended on the Supreme Court building, with anti-abortion rights activists chanting "abortion is violence. Abortion is oppression" as well as "Hey Hey Ho Ho Roe v. Wade is going to go!"

But by the evening, it was mostly pro-abortion rights activists.

"Women will die, they already do," warned Victoria Lord, a 61-year-old historian, grimly.

"People with less economic means will be the most impacted by this decision," said Michaela Palmer, 29, who held a sign that said "My uterus not yours."

"People who are privileged will find others means to have an abortion, they will travel to other states," the energy consultant told AFP.

In Roe v. Wade, the court ruled that access to abortion is a constitutional right. In a subsequent 1992 ruling, Planned Parenthood v. Casey, the court guaranteed a woman's right to an abortion until the fetus is viable outside the womb, which is typically around 22 to 24 weeks of gestation.

Most developed countries allow abortions on request up to a gestational limit, most often 12 weeks.

Roe v. Wade makes the United States one of a handful of nations to allow the procedure without restriction beyond 20 weeks of pregnancy -- although many others allow it past that point for specific reasons.

The court had been expected to decide this June on challenges to Roe v. Wade.

The Republican National Committee said it was time for abortion decisions to revert to state governments.

"The far left wants unelected judges to impose a radical, one-size fits all abortion policy, leaving Americans without a voice," it said.

The governor of Oklahoma marked the day by signing a highly restrictive law banning abortions after approximately six weeks of pregnancy -- with no exceptions for cases of rape or incest -- matching a Texas law enacted last year.

The laws are being challenged in court.

The draft Supreme Court opinion was written by Justice Samuel Alito and, according to Politico, has been circulating since February inside the court -- now dominated 6-3 by conservatives.

It calls the Roe v. Wade decision "egregiously wrong from the start."

"We hold that Roe and Casey must be overruled," Alito writes in the document, labeled the "Opinion of the Court."

"It is time to heed the Constitution and return the issue of abortion to the people's elected representatives."

The Guttmacher Institute, which backs abortion rights, has said 26 states are "certain or likely" to ban abortion if Roe v. Wade is overturned.