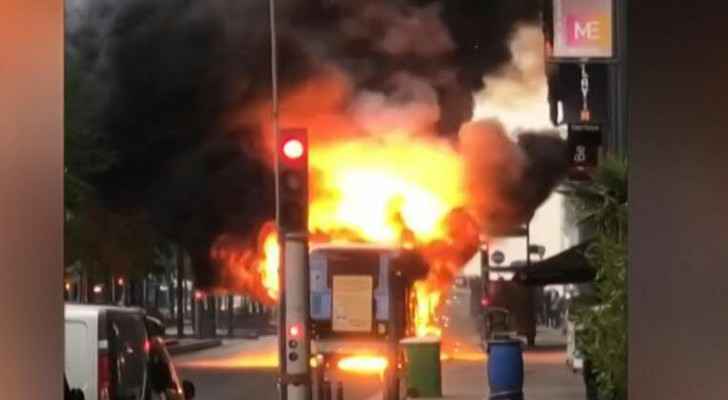 Dozens of electric buses will be taken off the streets of Paris temporarily "as a precaution" after two of the vehicles caught fire within a month, in a possible setback for the French capital's green transport ambitions.

Following a second blaze on Friday morning, in which no one was hurt, "RATP has taken the decision to suspend use of 149 electric buses” of manufacturer Bollore's Bluebus 5SE model, the state-owned public transport operator said.

That number amounts to almost one-third of the city's electric bus fleet.
The number 71 bus that caught fire in southeast Paris early Friday released thick clouds of black smoke and a strong smell of burning plastic, according to an AFP journalist on the scene.

"The bus driver immediately evacuated all the passengers. Nobody was hurt," RATP said, while the city fire service said the blaze was put out by around 30 firefighters.

A first bus caught fire on the upscale Boulevard Saint-Germain in central Paris on April 4, destroying the vehicle but again causing no injuries.

Regional authority Ile-de-France Mobilites said RATP should "find out everything" about the fires and "take all necessary precautionary measures", while a transport ministry spokesman said the national government backed withdrawing the buses during the probe.

The region's branch of passengers' association FNAUT called the fires "concerning", calling for "swift corrective actions by the manufacturer".

Socialist Mayor Anne Hidalgo has made environmental protection a priority of her Paris administration, with measures like adding green space, cycle lanes and pedestrian areas to the historically car-choked French capital.

- 'Electric buses not the issue' -

The city has since 2016 built up a stable of almost 500 electric buses from three different manufacturers, and RATP said there had been "no major incident" until this year.

The transport operator "has asked for a complete expert report from manufacturer Bollore, to explain the causes of these incidents and offer a plan of action to put these buses back to work safely", it added.

"Electric buses aren't the issue here, Bollore buses of this model are the issue," a spokesman for the transport operator added.

Bollore said in a statement that "the whole staff of Bluebus is mobilized... to find out the origin of the accident".

Meanwhile RATP said there would be disruption on some bus lines during Friday as the remaining fleet is redeployed.

Bluebus is part of the sprawling empire of French billionaire Vincent Bollore, whose interests range from transport and logistics to media, generating around 24 billion euros ($25 billion) per year in revenue with 80,000 employees.

Bollore's 12-meter (39-foot) electric buses are a familiar sight on the streets of the French capital, emblazoned with the words "100 percent electric vehicle".

On its website, the company says the buses are "fitted with a new generation of batteries... with high energy density and optimal safety" spread around the roof and rear of the vehicle.