‘Recent attacks against Jerusalem’s Christian community are unacceptable’: US Representative

‘Recent attacks against Jerusalem’s Christian community are unacceptable’: US Representative 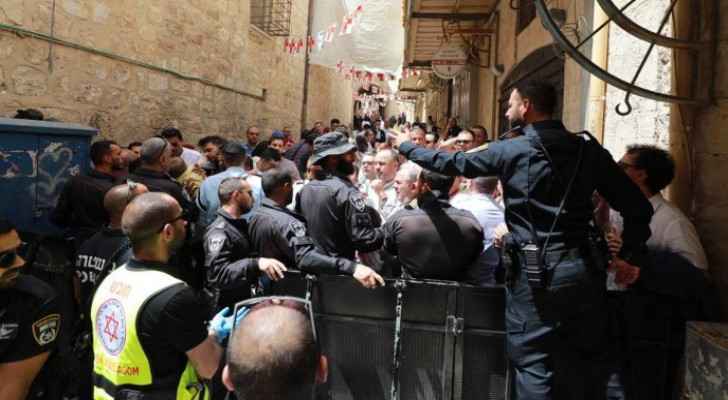 Friday, a bipartisan group of Members of Congress sent a letter to US Secretary of State Antony Blinken expressing their deep concern “by the rise in attacks against the Christian community in Jerusalem.” The letter was led by Joaquin Castro and Gus Bilirakis.

“The recent attacks against Jerusalem’s Christian community are unacceptable,” Castro wrote on Twitter.

He continued, “Today, @RepGusBilirakis and I led a bipartisan letter urging @SecBlinken to work with his Israeli counterparts to ensure Jerusalem is a place where Christians, Muslims, and Jews can worship freely.”

The protection of religious freedom abroad must be a critical element of U.S. foreign policy. As you have stated, freedom of religion is "a cherished American value and universal human right, our own experience compels us to advocate for the rights of vulnerable and underrepresented people around the world. The United States maintains its unwavering support to promote and protect freedom of religion or belief for all."

We write today as a bipartisan group of Members of Congress deeply concerned by the rise in attacks against the Christian community in Jerusalem. In December 2020, an Israeli man attempted to set fire to the Church of All Nations located on the Mount of Olives in Jerusalem. In the span of one month in 2021, the Monastery of the Romanian Church in Jerusalem was the target of four acts of vandalism. Christian clergy are also targets of attacks. In May 2021, an Armenian priest was attacked by three Israeli youths as he made his way to the Church of the Holy Sepulcher in Jerusalem. These are just a few examples of the attacks sustained against clergy and church properties. Despite general protections afforded to minority religious communities by the Israeli government, the actions of radical groups pose a grave threat to the long-term viability of the Christian presence in Jerusalem.

On December 13, 2021, the Patriarchs and Heads of Churches in Jerusalem released a statement expressing the current threats against their community:

"Throughout the Holy Land, Christians have become the target of frequent and sustained attacks by fringe radical groups. Since 2012 there have been countless incidents of physical and verbal assaults against priests and other clergy, attacks on Christian churches, with holy sites regularly vandalized and desecrated, and ongoing intimidation of local Christians who simply seek to worship freely and go about their daily lives. These tactics are being used by such radical groups in a systematic attempt to drive the Christian community out of Jerusalem and other parts of the Holy Land."

The decline of the Christian presence in Jerusalem is not only a blow to religious freedom but also has humanitarian consequences. Ministry programs organized under the auspices of the Christian churches in Jerusalem meet the medical, educational, and humanitarian needs of many disadvantaged people regardless of religious affiliation throughout Israel, the Palestinian territories, and Jordan. If the radical groups succeed in driving out the Christian community, many of these programs will no longer be able to operate. Additionally, Christian tourism to the Holy Land generates S3 billion in revenue for the Israeli economy, demonstrating the significant financial contribution the Christian community in Jerusalem makes to Israel despite its small numbers.

The actions of radical groups who are able to act with impunity directly threaten the religious freedom of the Christian community in Jerusalem and undermine the rich history of interfaith cooperation within the city. As His Beatitude Theophilos III, the Greek Orthodox Patriarch of Jerusalem, has stated: "Jerusalem is home to three monotheistic religions, Judaism, Christianity, and Islam, and has long been an illuminating example of a mosaic community. It is the spiritual capital of the world, comprising a family of faiths, all of which enjoy a long and unique rich heritage. The beauty of this city rests upon its cultural and religious diversity. By working to exclude one community, the Christians, these radicals pose an existential threat not only to the Christian family but to Jerusalem itself, a point upheld by so many of our Jewish cohabitants of the Holy Land."

We ask the State Department to work with the Israeli government to uphold its stated commitment to the freedom of religion and worship for all religions and to hold accountable the radical groups who are engaging in sustained attacks against Christian clergy and destruction of church properties. During his confirmation testimony before the Senate Foreign Relations Committee, Ambassador at Large for International Religious Freedom, Rashad Hussain pledged, if confirmed, to “carry out the United States' abiding commitment to championing international religious freedom for everyone everywhere."

We are grateful for the State Department's continued commitment to advancing international religious freedom and look forward to working with Ambassador Hussain to ensure the United States government continues to play a proactive role in defending the rights of vulnerable religious communities everywhere. We ask you to work closely with counterparts in the Israeli government to ensure Jerusalem is a place where Christians, Jews, and Muslims can worship freely, without fear of attack." 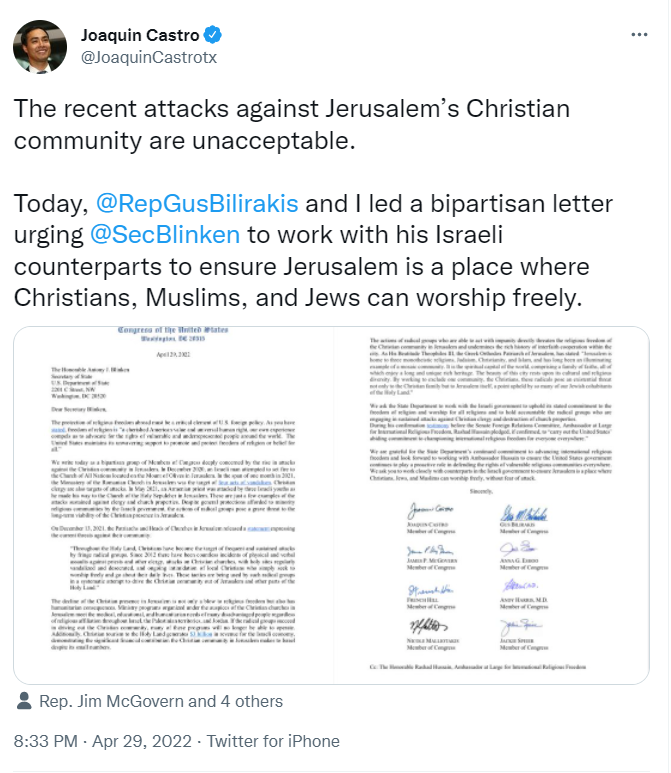 Protests in US city after video shows police shooting of ....

Protests in US city after video shows police ....

Protests in US city after video shows police ....

Protests in US city after video shows ....