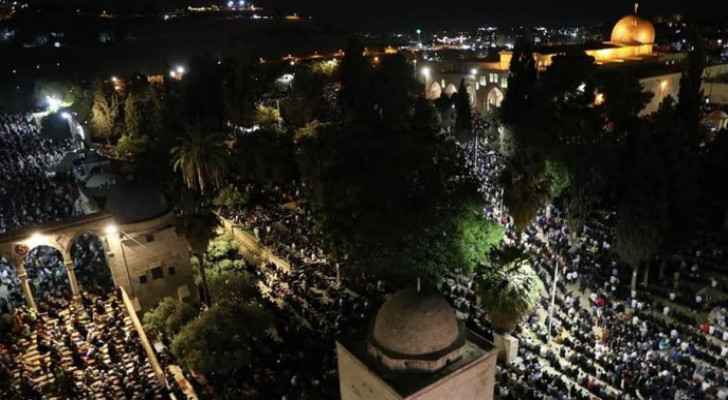 Local media outlets said that the IOF attacked worshipers after they performed Al-Fajr prayer and at the end of Laylat al-Qadr.

They added that Red Cross teams rushed to the scene to provide the necessary treatment for the injured.

On Wednesday, around 250,000 worshipers performed Laylat al-Qadr, or Night of Destiny (the night of the twenty-seventh of Ramadan), in Al-Aqsa Mosque.

The Ministry Of Awqaf in the city of Jerusalem stated that around 250 thousand worshipers flocked to Al-Aqsa Mosque to commemorate Laylat al-Qadr, despite the heavy restrictions imposed by the Israeli Occupation Forces (IOF) on the entry of Palestinians into the site.

The courtyards of Al-Aqsa were crowded with worshipers coming from the city of Jerusalem and from the 48 lands, and those who managed to reach from the West Bank, Roya’s correspondent reported.

The IOF reinforced its forces in the city of Jerusalem and deployed about 3,000 personnel in the vicinity of Al-Aqsa Mosque and the Old City.