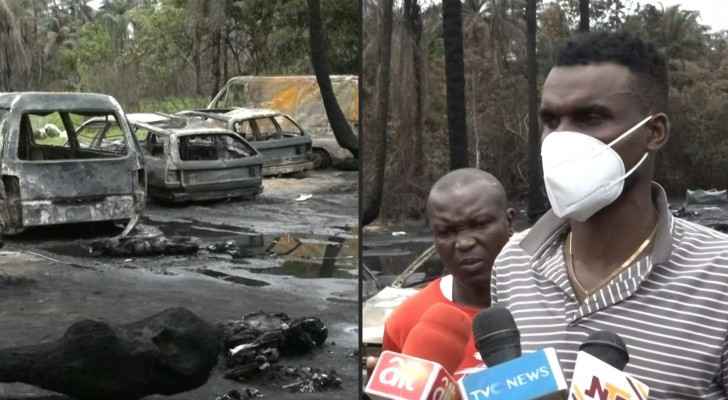 The death toll from an explosion at an illegal refinery in southern Nigeria rose to 110 on Sunday, the emergency services said, as more people died from their injuries.

The blast occurred late Friday at the illegal site between the southern oil states of Rivers and Imo, police said.

"The death toll is now 110 from 80 as more people have succumbed to their injuries," Ifeanyi Nnaji of the National Emergency Management Agency (NEMA), told AFP.

Ifeanyi, who heads NEMA operations in the area, said dozens of people "with severe burns are still in the hospitals".

Earlier Sunday, he told AFP that at least 80 had been killed -- but that more could die of their injuries.

"We learnt many bodies are in nearby bushes and forests as some illegal operators and their patrons scampered to safety."

Burnt-out vehicles and jerry-cans used in scoop up stolen crude and petroleum products littered the scene of the carnage, Nnaji said.

Police confirmed the explosion happened late Friday at the site of an illegal refinery but did not provide figures on how many died.

He said the explosion "claimed several lives, especially those engaged in illegal oil refining and bunkering".

An official from an NGO in the oil-producing Niger delta said the corpses of the victims littered the area.

"Several bodies burnt beyond recognition lay on the ground while others who may have attempted to run for safety are seen hanging on some tree branches," said Fyneface Dumnamene, executive director of Youths and Environmental Advocacy Center.

Nigerian President Muhammadu Buhari on Sunday described the incident as a "catastrophe and a national disaster", his office said.

The sponsors of the illegal refinery "must all be caught and made to face justice", he added.

The Nigerian leader also ordered the security and intelligence agencies to intensify the clampdown on illegal refineries in the country.

The disaster is the latest to hit oil-rich Nigeria in recent years.

Pipeline fires are commonplace in Nigeria, in part because of poor maintenance but also because of thieves who vandalize pipelines to siphon off petrol and sell it on the black market.

Crude oil is tapped from a web of pipelines owned by major oil companies and refined into products in makeshift tanks.

According to industry sources, Nigeria loses around 200,000 barrels of crude to oil thieves, vandals and illegal refining operators daily.

Most people in the Niger delta live in poverty even though the country is the biggest oil producer on the continent, with an output of around two million barrels per day.

Imo state officials said the suspected owner of the illegal refinery was wanted by police. The owner will be prosecuted, said state commissioner for petroleum sources Goodluck Opiah.

According to Opiah, the blast also destroyed marine life in the surrounding area, which is predominantly used by farmers and fishermen.

The perpetrators were from neighboring states in the region, he said, calling for those involved to be treated as "economic saboteurs".

The worst pipeline blast in Nigeria happened in the southern town of Jesse in October 1998, killing over 1,000 villagers.

The government has deployed the military to raid and destroy illegal refineries in the Niger delta as part of measures to stop stealing.

But the government's clampdown has not yielded results as hundreds of illegal refineries still litter the swamps, creeks and waters of the impoverished Niger delta, causing spills and pollution of the environment.

Tunji Oyebanji, chairman of Downstream Group of Lagos Chamber of Commerce and Industry told AFP the security agencies "are not doing enough to stop illegal refining in the Niger delta.

"As long as there is laxity in enforcement by the security forces, the unwholesome practice will fester," he said.

He called for stronger sanctions against illegal operators and their patrons.

"The motivation for bunkering should be discouraged," he said, referring to the local term for stealing and illegal refining.

"If there is no market for the illegal products, nobody will do it."