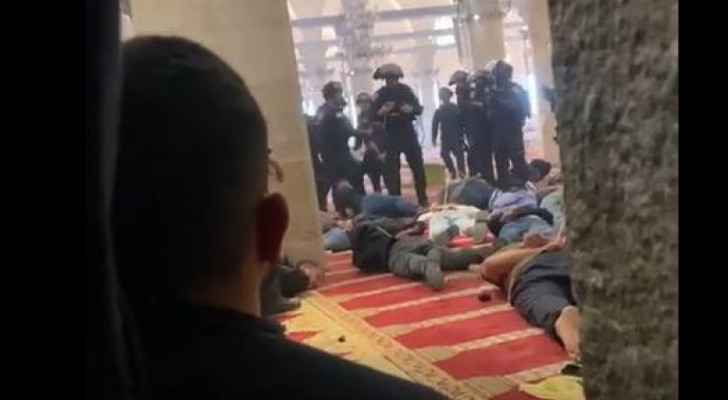 In an unprecedented move, Israeli Occupation Forces (IOF) on Friday stormed al-Musallah al-Qibli, which is the main prayer hall inside Aqsa Mosque.

40 worshippers inside the prayer hall were arrested out of a total of 400 Palestinians inside the Aqsa Mosque compound, according to reports.

This storming is the first of its kind, as in the past, IOF used to fire gas and sound bombs and bullets inside the prayer hall without stepping foot inside it, however, today soldiers entered it armed abusing and arresting worshipers on the holiest day of the week in Islam.

Earlier at dawn, over 100 Palestinians were injured when the Israeli Occupation Forces (IOF) attacked worshipers at the Aqsa Mosque.

The Palestinian news agency, Wafa, said that a large number of the IOF stormed the courtyards of Aqsa Mosque after Fajr prayer (dawn), and fired stun grenades, tear gas and rubber-coated bullets at the Palestinians, injuring a number of them.

The Palestinian Red Crescent in Jerusalem said that they dealt with over 100 injuries, which also included journalists and paramedics.