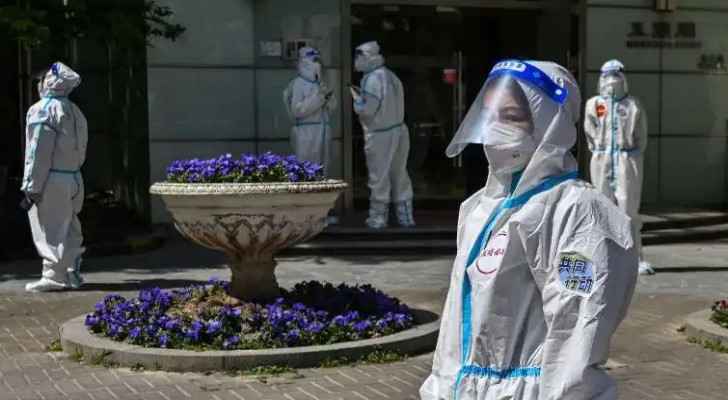 Shanghai health officials on Monday defended a policy of separating babies and young children from their parents if they test positive for Covid-19, as frustration at the city's tough virus controls builds.

Around 25 million people in Shanghai, China's largest city and financial center, remain locked down as authorities try to snuff out the country's most severe virus outbreak since the end of the first pandemic wave in early 2020.

Under China's unbending virus controls, anyone found positive -- even if they are asymptomatic or have a mild infection -- must be isolated from non-infected people.

That includes children who test positive but whose family members do not, health officials confirmed on Monday, defending a policy which has spread anxiety and outrage across the city.

"If the child is younger than seven years old, those children will receive treatment in a public health center," Wu Qianyu, an official from the Shanghai Municipal Health Commission, said Monday.

"For older children or teenagers... we are mainly isolating them in centralized (quarantine) places."

Parents and guardians have taken to social media to voice their anger at the policy.

"Parents need to meet 'conditions' to accompany their children? That's absurd... it should be their most basic right," one unnamed commenter wrote on social media platform Weibo.

Unverified videos of babies and young children in state-run wards have been widely shared.

But Shanghai official Wu said the policy was integral to virus "prevention and control work.”

"We have made it clear that children whose parents are also positive... can live in the same place as the children," she added.

Frustration is mounting in Shanghai, which on Monday recorded 9,000 new virus cases and is the epicenter of China's outbreak.

Authorities initially promised not to lock down the whole city, instead targeting virus clusters with localized lockdowns of specific compounds or districts.

After weeks of growing case numbers, city officials last week gave a rare admission of failure of their tactics.

They introduced a two-stage lockdown, initially billed as lasting four days each to mass test both sides of the city.

Several days on, residents fear they are under a prolonged stay-at-home order by stealth, unable to exercise outside or walk dogs and with limited access to fresh food.

China's zero-Covid strategy is under extreme pressure as the virus whips across the country, with another outbreak in the northeast.

Until March, China had successfully kept the daily caseload down to double or triple digits, with harsh localized lockdowns, mass testing and travel restrictions.

On Monday the nationwide caseload topped 13,000 for a second day, as the daily infection tally hit rates unseen since mid-February 2020.

Jordan will have summer safe from COVID: Minister of ....

Jordan will have summer safe from COVID: ....

Jordan will have summer safe from COVID: ....

Jordan will have summer safe from ....